Since the new M1-based Macs were announced, many consumers have been concerned about which apps and software would work on the computer. After all, the new chip has no real compatibility with apps made for Intel chips. Apple's new computers even have a way of emulating this software, but of course it is better to deal with apps for Macs with M1 chips that have full compatibility.

As this may not be so obvious, we separated the apps for Macs with M1 chip that you can use without emulation and on the first day. To learn more, just check out our suggestions below.

Read too: 7 best Android emulators for Mac in 2020 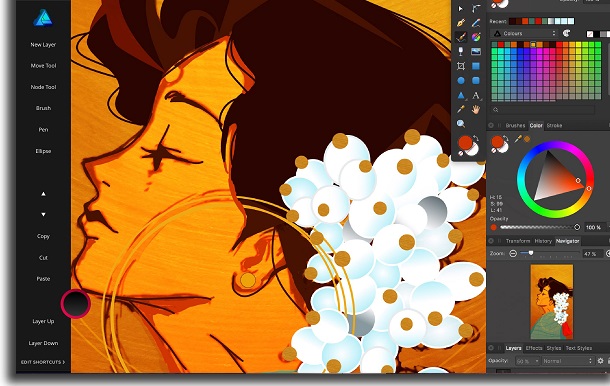 Many Mac users love Affinity apps, which include Affinity Photo, Designer and Publisher. Fortunately, you won't have to emulate any of them on your Mac M1.

Everyone already has native support for this new Apple processor. Considering how popular it is on the system, getting the apps ready on the first day was an excellent idea for developers.

Check out more by accessing the link.

For those looking for calendar apps for Mac with M1 chip, we can suggest Fantastical. The developers released a recent update along with Big Sur, the new version of MacOS.

With the update, support for M1 chips came. So, you don't have to wait for anything to start using it. You can learn more by checking the link.

For those who like productivity apps, Things 3 is sensational. Its developers have always been quick to update the software to new versions of iOS or MacOS, so it's no surprise that there is already compatibility with the M1.

Now notifications have gotten better and you have a lot more options for widgets that you can use on the Mac. A great addition to this new line of computers.

For those who use Drafts to write their texts, we can say that you need not worry. Like the others on our list, the app has also received an update that makes it one of the apps for Macs with an M1 chip.

For those who don't know, the old iPhone and iPad app received a version for Mac as early as 2019. With the Big Sur update, it gained compatibility and several widgets.

A lot of people use Twitter right in the browser when they're on the PC, but you can't forget that it has its own app on the Mac. Fortunately, it's one of the apps for Macs with an M1 chip that you can use on the first day.

The update with this support has recently arrived and is now available to everyone. If you want to check and download the app, visit the link below.

It may seem strange to have to say that an app as common as a web browser is compatible with the new Mac. But with the chip change, there are several others that do not currently have native compatibility.

For those who do not want to use Safari, a good tip is Chrome, which can be used without problems on new Apple computers. To learn more, check out the link.

Darkroom is one of the most interesting apps you can find on iOS, iPadOS and, of course, on MacOS. This photo editor can also be used on the Mac with an M1 chip, as its new update has brought this support.

The best thing is that it now works as a universal app, meaning you can use it on any of Apple's devices and there will be sync between them. So, if you make edits and save your work on the iPhone, you can easily return to the same project on the Mac later.

It's even cool for those who want to mirror the iPhone screen on the Mac. To download the app, take a look at the link.

Since we're talking about photography apps, it's worth mentioning Photoshop. This is easily our most fearful recommendation among apps for Macs with an M1 chip.

After all, the version that Adobe released with support for M1 is still in beta and has several bugs and other problems. They are being corrected, of course, but your experience can be greatly impaired in the beginning.

If you find that you cannot work with this version, you can emulate the old software yourself. To learn more, check out the link.

Pexelmator Pro is one of those exclusive software that could not be left out of the list of apps compatible with the Mac. Fortunately, the developers know this and launched not only an update, but a redesign of the app.

The image editor has a completely new design and menus that are much more accessible and easy to learn to use. To check everything and download the app, check out the link.

To close the list of apps for Macs with M1 chip, we have something very surprising. This is not an application, but an extremely popular game: World of Warcraft, one of the best online games for PC that is also available on the Mac.

Although Apple computers suck at gaming, Blizzard made a point of getting the MMO ready for the M1 on launch day. This way, you can play it at will and without the need for external software.

Whoever wants to know more about the game can check the link. Be sure to also check out our list of the best free Mac games.

Did you like the apps for Macs with M1 chip?

Did you take advantage of our list to know the best apps for Mac with M1 chip that you can use on the first day? Don't forget to leave your comment telling us what you think of the suggestions.

Don't forget to check out our guide on what to do when you encounter one of the common Mac problems.