Documentary series may not be as popular as fantasy series or war series, like Game of Thrones or Stranger Things, but they tend to have a big impact on those who watch them.

They often bring out invisible issues in our daily lives, explain how the world works or simply tell real stories that are even more impressive than fiction. It is not for nothing that watching series of the genre helps us to have a more conscious view of our actions before the world.

For this reason, we have put together in this article some of the best documentary series that you can see in the best apps for watching movies and series available on your computer or mobile phone.

1. The Giant Beast that is the Global Economy

With the word giant in its name, it is not surprising that this documentary series has such a huge and almost unpronounceable name, even for those who have been learning English for a long time. Presented by comedian Kal Penn, he travels the world explaining invisible details of our economy and society.

With just one season of eight episodes, he explains questions about the importance of rubber to the world and how our reserves are threatened by a simple plague, tries to seek a relationship between rich people and their attitudes – or what kind of action to take to get rich – and even how the illegal money laundering market works.

In a humorous and didactic way, we ended up learning things that are incredible, but at the same time, terrifying. One of the best documentary series to understand how the current world works and where it can go.

The Giant Beast that is the Global Economy is available on Amazon Prime Video through the link.

An important documentary on the environment, Nosso Planeta brings impressive images about the natural diversity that still exists on the planet, even considering the serious risks it runs.

Focused on exuberant photography, the documentary series brings a diverse range of curiosities that are not so obvious to those who live in urban centers. Our Planet has only one season and is available on Netflix.

In his accusation, it is said that many of the crimes he denounced in his program were orchestrated by the presenter himself, who has become a kind of "big shot" in the popular and political scene of the city.

The episodes of the series show evidence and testimonies both for the innocence of the presenter and against, making it a challenge to know what the truth is. You can watch Bandits on TV on Netflix.

Interesting for those who want to know the story behind shooting games like Battlefield and Call of Duty, The Second Color War does the impressive job of coloring the images – both photos and videos – of the time, taken in black and white.

As we show in this article, The Second Color War is one of the best Netflix documentaries in 2020.

If you're looking for Netflix series about Brazil, Guerras do Brasil.doc may be what you were looking for. Although we are known as a peaceful country with almost zero chances of wars, our history does have quite bloody chapters, both in internal and external wars.

In a five-episode season, each episode has a conflict as its theme, being the Palmares Wars, Wars of Conquest, Paraguay War, Revolution of 30 and War of Trafficking.

Guerras do Brasil.doc is available on Netflix. 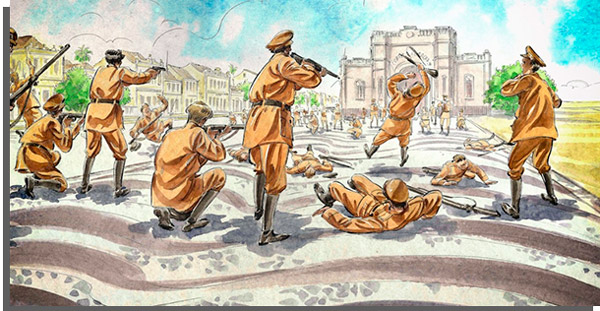 To get a little out of the themes of war and criminality, let's see a documentary with a much lighter theme: dogs!

Exploring the link between humans and dogs, Only Dogs brings in its six episodes different – and exciting – stories of this relationship between animals and caregivers. One of the most unique documentary series, which focuses on the importance of this interaction between human and animal, in addition to the impacts that one has on the other.

Only Dogs is also available on Netflix.

7. Abstract: the Art of Design

Design is an aspect that we hardly notice, but it is always present around us. Objects, products, houses, commercial buildings and social media posts: everything we saw has design elements in its design.

Taking more to the side of contemporary art, Abstract: the Art of Design explains exactly how design influences every aspect of our life. Among documentary series, Abstract also cares about showing who does this abstract work and helps to make it a reality.

You can watch Abstract: the Art of Design is available on Netflix.

Accused and convicted of murdering a woman in 1985, American Steve Avery was acquitted 18 years later after discovering that his DNA did not match those found at the crime scene. To obtain redress for his time in prison, the innocent man sues the police.

What happens next? He is arrested again for a similar crime. The question that remains is: is he the one to blame this time, or was he a frame to avoid the process?

With two seasons, Making a Murderer is available on Netflix.

9. The Most Extraordinary Houses in the World

One of the best documentary series to marathon on a light Sunday, The Most Extraordinary Houses in the World showcases some of the most unusual residences you can find on the globe. Another interesting option for design fans, but with a greater focus on architecture.

In the three seasons of the series, the presenters will show the most unusual houses in different types of environment, such as forests, ponds and cliffs. These houses are located in all types of countries, like Norway, India, Spain and even Brazil!

The three seasons of The Most Extraordinary Houses in the World can be watched on Netflix.

If you want unusual and eccentric documentary series, you can start with Mafia of Tigers. The Netflix miniseries shows the underworld of breeding and big cats in the United States.

With incredible events – like the fact that the United States already has more large cats in captivity than free animals worldwide – it will show how a zoo owner named Joe Exotic has just been accused of committing murder within this unknown universe by much of the world.

Do you want to know something strange and potentially dangerous? Then watch the Mafia of Tigers on Netflix!

Documentary series: which is your favorite?

Have you ever watched any of these documentary series? Which one is your favorite or which one impressed you the most?

Tell us in the comments and see some more series you should watch!