10 best games to enjoy at home

Okay, you can't take any more hearing about this coronavirus and you are certainly looking for games to enjoy at home to try to forget that it exists for a few moments.

So we apologize in advance for reminding you of it in our first sentence.

From here, our attempts will go in the direction of helping you to be distracted from all of this with the many cultural content available online. Especially if you work in a sector that is not essential, but still does not make it possible to work from home.

The games below were launched in recent years and include all types of players, according to the configuration of your home. Do you live alone and also prefer to play that way – preferring to meet online with friends through apps like Houseparty? The first section is yours.

He lives alone, but that should remove the feeling of isolation with good online games. Some of the games to enjoy at home can be played with hundreds of other game fans over the internet.

If you live as a couple or just you and another person with whom you share the house, we also bring games that can play in pairs. At the end of the article, we will also indicate games to enjoy at home when there are more than 3 people living together.

All of the games below have been released in the past three years. That is, it is worth only games released from 2017 until March 2020 for PC.

Remember that you can always take screenshots or save games to share on social networks and it is important to consider the PC temperature when downloading the heaviest games from this list.

Games to enjoy at home – 1 player

As promised, this section features two games with a good amount of hours to beat. If you prefer to explore the stories of your favorite games and don't like the idea of ​​playing with other people, these tips are for you.

When we talk about games to enjoy at home, we are not mentioning short games that can be beaten in 10 hours. We are talking about robust games, with many activities and challenges to complete.

Assassin’s Creed: Odyssey is one of these games. Mixing action games with RPG games, you will live like Kassandra or Alexios, descendants of King Leonidas who try to discover the secrets of their past, while trying to dismantle a plot that could take power in Ancient Greece.

In addition to the main story, the player can do hundreds of side quests, strengthen his character, find legendary weapons and equipment, and face the most feared mercenaries in Ancient Greece.

To get an idea of ​​how much to do in the game, only the main plot takes about 40 hours to complete. If you want to complete all the challenges of the game, the time triples to about 123 hours.

Not to mention the additional stories Legacy of the First Blade, The Fate of Atlantis and The Lost Tales of Greece, which add about 60 hours to the game. Click the link to learn more about Assassin’s Creed Odyssey.

Winner of the biggest annual game awards in the world, Sekiro: Shadows Die Twice not only has a lot of content, it is also quite challenging.

Set in feudal Japan, the title puts you in the role of the protagonist known only as the “one-armed wolf”, a disfigured warrior who was barely saved from death. Designed to protect a young feudal lord descended from an ancient lineage, you will face enemies with varying abilities and combat styles.

But be careful: duels are deadly and will require a lot of concentration. On the other hand, make no mistake: the challenge is worth it and it was not for nothing that it was considered the best game of 2019.

Click on the link to learn more about Sekiro: Shadows Die Twice.

The next games to follow are also for 1 player, but with the difference that you can play with your friends online, adding the social element to the game. The titles are of a more competitive nature, instead of being highly focused on history like the two games we showed above.

The well-known Call of Duty franchise already had an experience battle royale in one of your previous titles. However, it was a paid game, which not everyone had access to.

That changed with the recently released Call of Duty: Warzone. Free for PC and consoles, you can download the title and compete with dozens of other players simultaneously. The game also features modes in pairs or teams, allowing you to create a squad with your friends.

Okay, we confess that we cheated on this one. Black Desert Online was launched in 2016, but in 2018 it received a major update, improving its graphics and systems. The game was so successful that it also has a mobile version.

It is ideal for those who prefer to explore fantastic worlds instead of exchanging shots with dozens of other players on a limited map. In other words, Black Desert Online can be the solution to gather your friends online.

The game allows you to explore your world and the various dungeons. Focused on quick fights, each player can assume a role in the team (protector, healer, assassin, among others) to balance the skills of each one and to account for the game's bosses and other groups of players.

Visit the Black Desert Online page to play it on your computer or on consoles. 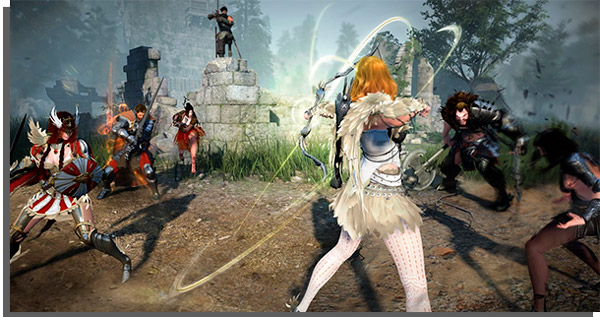 Games to enjoy at home: doubles

One of the best things about living with one more person is the activities you can do together. That is, a new range of games to enjoy at home opens up.

Below are three of the best games to enjoy in pairs!

Dubbed in China the “divorce game”, the joke does not hold up since many couples have enjoyed the experience of sharing a virtual kitchen. The goal of Overcooked! 2 is simple: save the kingdom by filling orders with speed and accuracy.

But there is no way to solve this alone: ​​the arrangement of ingredients, tools and pans is distributed over locations that are inaccessible to one of the digital cooks. In addition to cooperative matches, there are also competitive ways to find out who is the best video game chef!

Click on the link to learn more about Overcooked! 2.

After many years as a game alone to play online, recently the producer of Fortnite released the possibility of placing local doubles, dividing the TV screen.

That is, if you enjoyed the game, but stopped by having no one to play with, now you have an alternative between games to enjoy at home. So, visit the link to download Fortnite for free and see this full article with tips from the game.

Fighting games are always a good idea when you only have two people to play. Without many complex and easy-to-learn movements, it is not uncommon when someone simply presses buttons randomly and ends up winning the game.

Mortal Kombat 11 is one such example. The latest game in the famous (and violent!) Franchise takes a trip back in time and puts old and recent versions of its iconic characters to face each other.

It brings several game modes, including the games of one player against the other. It is also possible to play online, if you are not with the company to play. Click on the link to learn more about Mortal Kombat 11.

Games to play in group

If your family is made up of more than two people, not all of the above games will be ideal. Fortunately, some games were made to bring the family together on the couch and entertain everyone. We will show some of these games below!

A rather “eccentric” game, Heave-Ho allows up to 4 players to meet an apparently simple objective: not to let the protagonist fall to his death.

For that, each player controls one of the weird characters and they must support each other – literally! – to overcome the obstacles of each stage. Access the link and learn more about this curious game.

With a different footprint from the previous game, For the King is a good option for those who like the role-playing games or board. Each player uses a character with different abilities and must cross the map in order to solve the king's murder.

If you are a fan of games like Final Fantasy, For the King will certainly look nice and can be played in groups on your living room sofa. Click on the link to learn more about the game!

The last game on the list of games to enjoy at home is Wizard of Legend. Being able to play with up to 4 people simultaneously and in the same place, the game has a frantic pace and is quite challenging.

At the same time, this also translates into unprecedented fun. After all, with each game you lose, you learn how to better control your character and also the attack pattern of enemies, getting closer to dominating the game.

Click on the link to learn more about the Wizard of Legend.

What games to enjoy at home can not miss?

These games can cater to all types of audiences, making socializing more fun. Even if there are no PC simulation games on the list, the other genres will easily fit into your current routine.

Enjoy games and even think about creating games? Tell us and leave your own tips too!