Not being able to leave the house is certainly boring. To work around this problem, we have several lists of things to do, such as the best series to do marathon and the best games to play together on PC. Now, we've selected the best online games for iPhone, to play in the palm of your hand!

To check them all out, read the article, where we talk about each one and include download links.

We start our list with the mobile version of what is possibly one of the best fighting games of all time, The King of Fighters-i. It is the first in the series released for iOS and mobile platforms.

In it, you can play alone, against artificial intelligence, or online against other players. It features 32 playable characters and six offline game modes. Simple commands are a great attraction of this game, allowing beginners to enjoy. Follow the link to download.

Here, we have the iOS version of one of the best and best known shooting games, Call of Duty. It's completely free and has HD quality and customizable controls, as well as voice and text chat.

In it, you will find all the most iconic maps and multiplayer modes, in addition to battlefields with up to 100 players. Matches 5 against 5, sniper against sniper and more, everything is available in this app. See more in the App Store!

One of the best options for those who like to record games, Hearthstone is another of the best online games for iPhone. Developed by Blizzard originally for computers, it was launched for smartphones recently.

It is one of the most famous online card games, in which you control a deck, casting spells, summoning minions and controlling and dominating the battlefield. It is available through the link.

We also have Clash Royale, which is one of the best free games to play at home and is perfect for those who like to take a print of what they are doing. It is from the same creators of Clash of Clans.

In the game, you control characters, collect and upgrade dozens of cards with them, spells and defenses and more. The objective is to take down the kings and princesses from their towers to earn trophies, crowns and glory in the Arena. Click here to see more. 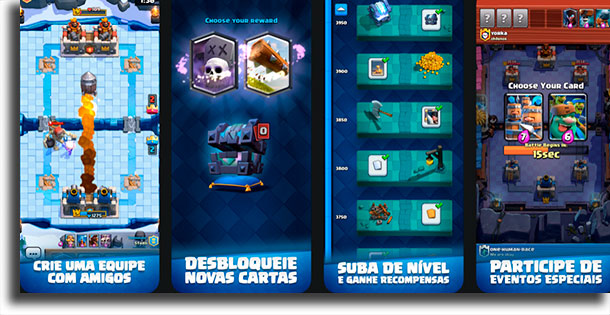 From the same creators of Clash Royale, Clash of Clans is one of the best known games for smartphones. It has thousands of players from all over the world!

In it, you build villages, create clans and fight in epic clan battles. It has several different characters, with team battles, working together and several upgrades that you can make to your troops. Download now through the link!

In it, you can face your friends or fight alone in many game modes lasting less than 3 minutes. Unlock new characters, use your unique skills and make improvements to become the best Brawler. Go to the App Store to download.

Anyone who likes car games has certainly heard of Asphalt, one of the most well-known games for smartphones. It is highly awarded, with awards for design, best iPhone racing game, best technical advancement and even best sports game.

In it, you can choose from a large collection of super cars from famous brands such as Ferrari and Porsche, customizing each one to your taste to compete in online races against up to 7 other players in real time. To play, follow the link right now!

If you like the RPG genre in video games, you may know Perfect World, a very famous MMORPG. Now, you can also have fun in this universe in the palm of your hand with one of the best online games for iPhone!

You can choose from the six main classes of the game, which you can change whenever you want. Participate in wild hunts and dungeons, using an excellent graphic, alongside your friends in lands without limits. Go to the App Store to download!

Created specifically for smartphones, PUBG is one of the most intense free action games. The game has already won some awards for best game. In it, you find several different modes, all multiplayer.

Battles of 100 players, payload mode, playoffs on horseback and much more, with gigantic maps in various real places, with cycles of day and night. Learn how to play PUBG Mobile here and download it right now via the link.

Finally, we have FIFA Football, one of the best football games that allows up to 22 people to play at the same time!

In it, you can train players to be superstars, participating in leagues or at World Tour events. You can face friends in 11 × 11 matches or play alone against big teams. To check, follow the link.

So, what did you think of our list of the best online games for iPhone?

Leave in the comments your opinion about the games we have chosen, saying if you think we should have included any other. Don't forget to also check out the best offline games for Android, the best simulation games for PC, how to create games and how to monitor your PC temperature!