For those looking for apps to watch movies and series, Netflix ends up being one of the main results. The platform not only has an excellent catalog for those who like to watch classic series and films, but for those who want to see original content. Fortunately, there are also plenty of options for Brazilian Netflix series that you can check out.

And to help you select which ones are most worthwhile to spend the weekend in a great marathon, we have separated some of the most interesting ones. So, if you want to know which Brazilian Netflix series you should check in your time off, just check the list below!

To start, we’ll already recommend a great documentary series that we guarantee you won’t be able to stop watching over the weekend. Bandits on TV shows the fascinating story of the former host of a police show, Wallace Souza.

Basically, when he had already risen to the political post in Manaus, he was accused of being involved in several crimes that he reported on TV. But the case has many nuances and testimonies and evidence from both sides.

For that reason, it is very difficult to know the truth, which until today has not been revealed completely. To check out more, just access the link below.

2. Until death do us part

Another good tip among Brazilian Netflix series for those who like this type of documentary content is Until death do us part. Unlike the previous tip, each episode focuses on a different case.

As the name already means, all these are passionate crimes. The testimonies are still attended by many family members, friends, lawyers and even police officers involved in the cases.

As these are real crimes, it is clear that the tone of the series ends up being heavier than the rest. So, keep that in mind if you really want to watch it.

Next, we are going to recommend a series that recently debuted, Boca a Boca. It has a very cool suspense atmosphere, something that we still don't see so often in national productions.

The story is all focused on a super mysterious disease that begins to spread to teenagers in an inland region. Apparently, the disease is transmitted by kissing and has far more serious consequences than a common virus.

If you liked the idea of ​​this series, you can check out more on the link.

You can tell that The Mechanism is one of the Brazilian Netflix series that has made the most noise since its launch. As she has “Operation Lava Jato” as the basis of her plot, it is to be expected that it would not please everyone.

Perhaps the biggest problem was that it was not clear what was based on real events and what was fiction. In this way, many characters clearly inspired by real people ended up acting or saying things that did not fit the truth.

This brought a lot of controversy to the series that promised to focus on Brazilian political corruption, but it does not mean that it is bad. In fact, it's very difficult to stop watching the episodes.

This is especially true for those who are fans of spy or suspense series. You can check the series by accessing the link. 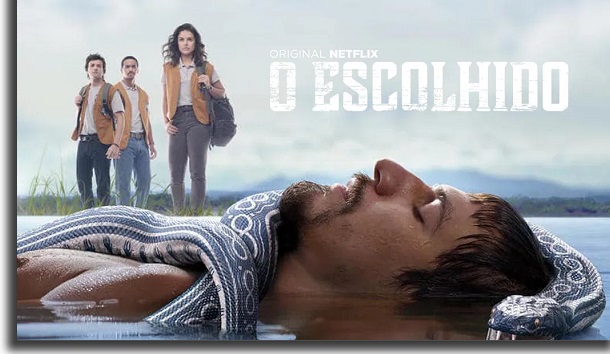 Already the series O Escolhido is very interesting because it was based on a Mexican work known as “Niño Santo”. It starts with a seemingly simple plot, but one that goes deeper into a captivating mystery.

The story shows three doctors who go to the wetland to treat people infected with the Zika virus. But it doesn't take long for them to come across the secrets that the place keeps.

Unfortunately, these mysteries turn out to be more dangerous than the virus itself. To watch the episodes, just check the link.

As for Bom dia, Verônica is another Brazilian Netflix series that recently arrived on the platform. Like so many others on our list, this production also follows a more investigative and suspenseful line.

The plot shows a female police officer who is investigating a sexual predator, but ends up discovering a couple with many secrets. In the midst of this, she still faces a horrible police corruption scheme. To check the series, just check the link.

Next, we’ll recommend a much lighter and funnier series. For those who have not yet heard, Samantha shows the life of an old children's program presenter who wants to return to fame.

Only of course it ends up taking the girl into very complicated and fun situations, to say the least. You can check it out by accessing the link.

If there is one of the Brazilian Netflix series that you may have heard of, it’s the most beautiful thing. Its first season was super popular and it didn't take long for a second wave of episodes to be ordered.

The plot is set in the 1950s and focuses on three women who decide to open a bar in Rio de Janeiro. All this facing the strong machismo of the time that only creates dozens of problems for the girls.

Fortunately, they are very creative and are able to move forward with excellent solutions and learning. You can check out more by accessing the Netflix link.

If there is a series that could not be missing from this list, it is 3%, without any doubt. It was simply the first original production that Netflix made in our country, so you can't miss it.

The plot shows us a dystopian future, in which the 20 year olds have the chance to get out of poverty and live a better life. But for that, it is necessary to do a test in which only 3% of people are able to pass.

If you want to spend your weekend glued to the screen, there is no better tip. You can check the series by accessing the link.

Taking advantage of the fact that we are talking about 3%, we are also going to recommend Onisciente, that both series were created by the same person. You can even say that Onisciente ends up being more interesting and having a better production value.

The funny thing is that the work also takes place in a dystopian future. Only this time, people are monitored 24 hours a day by drones.

That's when we met Nina, a woman who investigates her father's death, but who also works for the company that monitors these drones. If you found this production interesting, you just need to check the Netflix link.

Did you take advantage of our tips to get to know some of the best Brazilian Netflix series to spend your weekend? So don't forget to leave your comment telling us what you think of our suggestions.

Also be sure to check out our war series tips if you want something more intense!