10 lyrics apps for Android and iPhones

If you like listening to music, you probably also like to sing along. However, you often do not know what is being sung, so just pretend you are actually following. We created this list with the best lyrics apps so you don't get embromation!

Interested in having access to the lyrics of your favorite songs in the palm of your hand? So keep reading our article that will surely find some app that's right for you!

One of the most famous lyrics apps is Genius, which has versions for Android, iOS and for use in browsers. In it you will find over 1.7 million lyrics, artist interview videos and information about the songs and the musical universe.

It lets users find out which songs are playing around them by pushing a button on the screen. This will automatically show lyrics, letting you track even songs you don't know. To download, go to the Android Play Store or iOS App Store. You can also use it by visiting its official website. 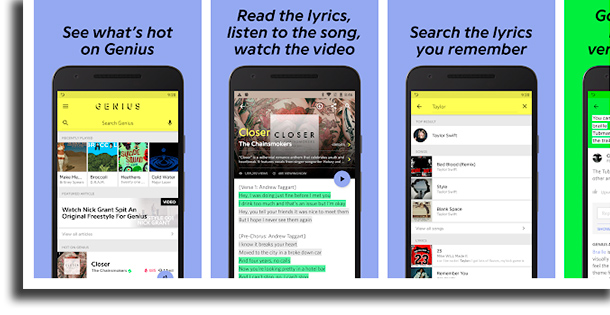 This is undoubtedly one of the best lyrics application alternatives, offering a huge collection of songs from around the world. Here you can sync lyrics with any song playing on your phone.

It works in conjunction with apps for listening to music online, such as Spotify, Youtube, Pandora, and Apple Music – be sure to check out our Spotify vs Apple Music comparison – so you have the lyrics to keep up with what you hear.

If that's not enough, the app still lets you identify songs you're listening to, has lyrics search, and lets you create LyricsCards, images that you choose with stanza of some music you like. You can download for Android, iOS or use in your favorite browser.

This app is premised on the ability to quickly and easily identify songs that are playing around your users, offering lyrics to follow. In doing so, it even shows information about the artists and the songs, such as curiosities.

It works in tandem with the best streaming music services, so you can always sing along. Also, if you have a song in your head but don't know what it is, just hum that SoundHound∞ identifies what it is. Get Android for this link or iOS here.

This is one of the oldest and best known Brazilian platforms so that its users can follow the lyrics of the songs they are listening to. It now also has a version for smartphones, both Android and iOS.

Here you can not only listen to the songs and follow the lyrics, but also watch the subtitled video, both in the original language and a translated version. You can also create playlists and listen to suggestions based on your music habits. To download, go to the Play Store or App Store or go to the official website. 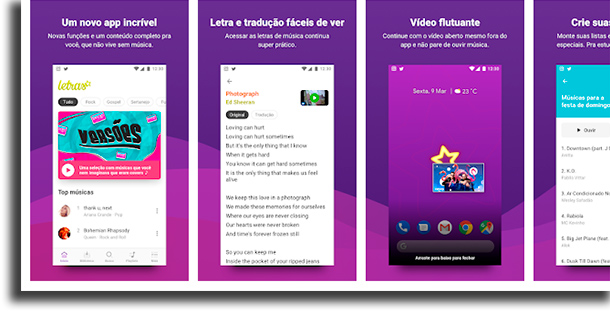 This is one of the most popular lyrics apps in existence, being used by over 100 million unique users monthly. It has the main functionality of identifying which song is playing around you, showing the lyrics for you to follow.

It also works in conjunction with Spotify, so if you are listening to something on the streaming service, Shazam will show you the lyrics. It also lets you add songs to Spotify playlists from the app itself!

Compatible with many smartwatches, lets you share the music you've discovered on social networks like Facebook and Twitter. If you want to use this app, go to the Play Store or the App Store.

Another of the Brazilians on this list is Vagalume, a platform that is already quite old, but still excellent. You launched your smartphone apps some time ago.

Here you have access to millions of lyrics, most of which are translated into Portuguese. They sync with the video so you can perfectly keep up with what is being sung. It is available for both Android and iOS.

Another great alternative is QuickLyric, an app that, while not providing translations, allows its users to have access to lyrics offline, which pays off. It even supports synchronized lyrics for karaoke lovers.

The lyrics float across your screen so you don't have to interrupt what you're doing to sing with the song simultaneously. It lets you identify songs with your microphone so you know which song is playing at the party.

It also supports dozens of famous music players like Spotify, Apple Music – check out our comparison between Spotify vs Apple Music -, Google Play Music and many more. To download, go to the Play Store. The app has no iOS version, but promises to launch one soon. 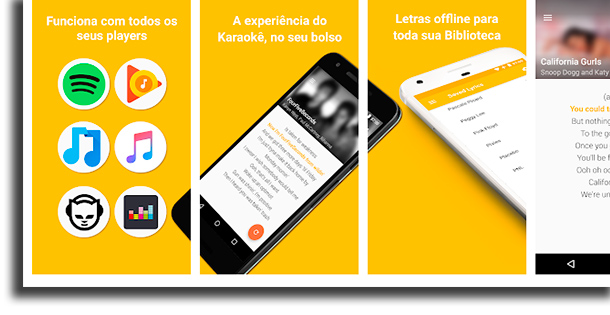 Another of the best known lyrics applications is Kboing, which originally emerged as an aggregator website. Nowadays, it has an Android app and its own online radio station.

Here you can listen to music and track lyrics through the app itself, create playlists, search for favorite artists, and catch up on what's new in the music world. To download it, follow the link.

This alternative is one that has a lot of features, as well as showing the lyrics of songs played in other apps to listen to music. One of the best is the ability to display information about the artists.

Here you can search for lyrics, detect what's playing, create text images of the music you're listening to, control how lyrics are displayed on your screen, and more. To download it, click this link for Android and this one for iOS.

We ended our list with Lyrics Library, one of the lyrics apps that is exclusive to Android. In it, you can easily find the lyrics of any song you want, even if it doesn't offer translation.

You can also write letters that are not in your catalog, edit and save them. Adding chords and ciphers to your lyrics are also features in the app, plus many other options. 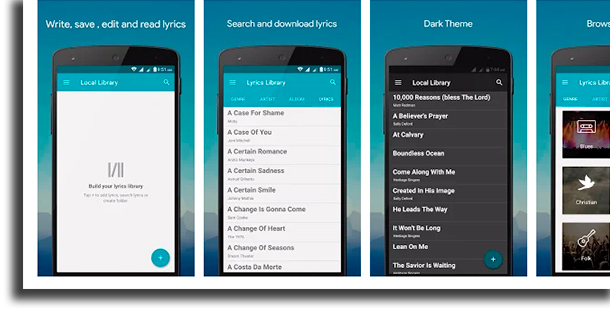 So what did you think of our list of lyrics apps?

Leave in the comments if you already knew any of them or if you found a better alternative to the one you used. Also be sure to check out our comparisons between Spotify vs Deezer and Spotify vs Youtube Music.