Smart speakers with voice assistants are a relatively new technology, with the first of them being launched in late 2014, the Amazon Echo. Shortly thereafter, the other tech giants created their own devices, with Google Home in 2016 and Apple HomePod in early 2018.

If you want a new smart speaker and are particularly interested in the Amazon Echo lineup with the Alexa assistant, keep reading this article where we compare the three versions available in our country.

Let's start our review with the third version of the first of the smart speakers, the new and improved Amazon Echo 3rd Generation. This product looks great with top quality materials. It is covered in fabric available in four colors, White, Black, Blue and Gray, 15 cm high and 10 cm in diameter.

However, you cannot change the color of your device at any time, as you could in 2nd Generation. What to buy is permanent. At the top of it has four buttons: that of activating Alexa, the ones of volume control and the one of muting the microphone; In addition it has 6 small holes for the microphone.

This is all in a ring that gives off different lights to identify what you are doing: blue when Alexa is active, orange when waiting to be set, and red when the microphone is muted.

On the back of it you will find two inputs: the charger one (unfortunately there is no fast charging or wireless charging) and the good old headphone jack, which has been taken from all the latest electronic devices, wave started by the iPhone 7.

Now let's talk about your little brother, the Amazon Echo Dot 3rd Generation, a very capable but much smaller and cheaper device. It is available in three colors, unlike Echo's four: White, Gray and Black. It is also lined with the same high quality fabric.

This new version is shorter and fatter than the previous generation, measuring 4.3 cm in height and 10 cm in diameter. Other than these differences, the rest of the design is exactly the same as its big brother, with the same buttons, ring and entrances.

Finally, we arrived at Amazon Echo Show 5, the screened version of the smart speakers in the line. It follows the pattern of excellent materials and is fabric covered, available in two colors only: Black with dark gray fabric or White with light gray fabric.

On the front of it has a 5.5 inch touchscreen display with a resolution of 960 x 480 pixels, plus a low resolution camera with only 1MP but which records videos up to 720p.

Its speakers are at the rear, where you will find the same inputs as other versions, plus a micro USB if you want to connect wired internet and, on top, have the volume control buttons, a button to enable or disable the camera and the microphone together and a camera cover that the user can drag.

Its screen shows by default the clock and the weather and climate, as well as switching between forecasts, news, and command hints that you can use with the wizard. Dragging down from the top of the screen shows the icons to go to the home screen, open the menu, brightness control and silent mode.

Dragging from left to right of the screen shows a very useful panel showing easily accessible buttons for tools such as alarms, music, communication, routines, smart home and video. Clicking on them will open simplified menus so you can access various tools without having to talk to Alexa. 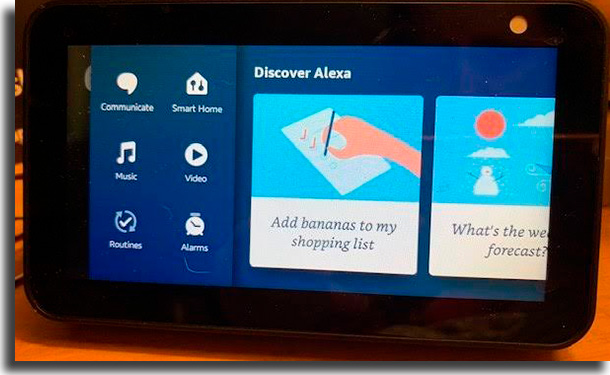 The Alarms tool has quite obvious functionality, that of setting alarms. Routines, in turn, allow the user to enable various automated functions on Amazon Echo Show and connected smart devices; You can also create your own routines through the Alexa app.

Communication allows the user to make video calls over Drop In, but not Skype, and make phone calls. Video shows Amazon Video and all the services of its kind connected through the Alexa app, also allowing you to select what you want to watch without having to say anything.

Music, unfortunately, is a largely overlooked function and only shows the latest songs played on the Amazon Echo Show. Smart Home shows you your most commonly used smart devices and also lets you control multiple devices at once.

Let's start by talking about Amazon Echo again. It offers an impressive sound quality, like that of the Echo Plus, version not sold in Brazil for now. It has a nice bass, considering the size of the device, but it certainly won't vibrate walls (but maybe with small objects).

It has a little bass distortion at very high volumes, but overall is excellent. Now, talking about the sound of higher frequencies like guitars or the like, you can't find any flaws in any volume, but the voices aren't as clear as the rest of the sounds.

It has two speakers internally, a 76 mm subwoofer and a 20 mm tweeter, both larger and more powerful than the previous generation, which were 63.5 mm and 16 mm. mm, respectively.

Amazon Echo Dot 3rd Generation follows the standard of being much better than the previous generation in its audio, however much it leaves to be desired compared to Amazon Echo. It has low, unlike its predecessor and the higher frequencies are much clearer.

The sound ends up sounding very compressed, with the voices standing out much more than they should from the instruments. However, it is probably good enough for most users. If not, simply connect a better speaker through the input at the rear.

It has only one 40mm speaker, which is responsible for all frequencies, which results in inferior but acceptable sound quality and certainly better than the Google Home Mini but far worse than the Apple HomePod.

Finally, we come to Amazon Echo Show 5, the only version of Amazon's smart-screen speakers that is sold in Brazil, which is also the smallest. Its sound is the worst of all on this list, almost completely without bass.

Songs that do not require lower frequencies do not sound so bad, however often no frequency is perfectly represented. If you want to use your smart speaker to listen to music, this option is the worst, even if you have a 40mm Dot-like speaker.

Since only this one has video, we will cover this in this section. Its screen has a 5.5 inch display, with a relatively low resolution of only 480p, but which is colorful enough to watch most basic things. If you want to watch a movie with good cinematography, however, your experience will be quite bad.

This is the main point in common for all smart speakers on this list: which voice assistant they use, having access to all the tools it offers.

On Amazon Echo line devices you can perform many more basic functions such as setting alarms, asking general questions and controlling every smart device you have in your home. To do that, just say Alexa (or any of the other words to call it, which can be changed by the app) and give the command. 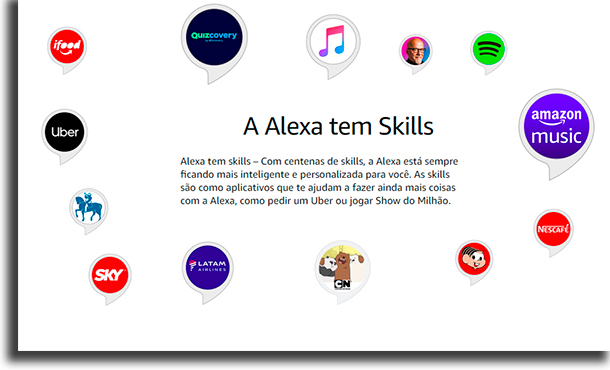 The user can ask any kind of question to the device that his artificial intelligence will try to answer appropriately; Examples of questions are how is the weather, game score, unit conversion and even more specific curiosities such as the height of famous.

Unfortunately, as good as this assistant is, it has one big problem, which is the difficulty in understanding different accents; In many tests, Alexa was consistently the worst in this regard.

If you want to listen to music, the Amazon Echo line assistant has access to a variety of platforms such as Apple Music, Spotify and Deezer; While it doesn't support many of the more common ones, you can turn your smart speaker into a wireless speaker by connecting your phone via bluetooth. If you don't know which music app is the best, we have comparisons of Spotify vs Apple Music and Spotify vs Deezer.

In addition, the user can have control over thousands of smart devices such as lamps, sockets, locks, thermostats, among many others. You can schedule complex tasks or control many of them with just one command, such as when you want to turn off all the lights and lock all the doors by saying good night to Alexa. 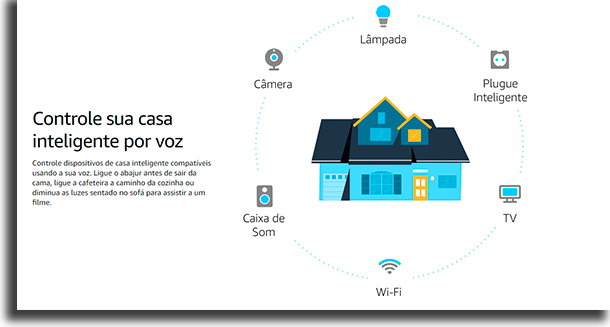 A major problem with this assistant is the difficulty of being understood by her, as it requires the user to speak in a much more specific way than competitors from Google and Apple. Also, have problems and follow on a topic when several questions are asked.

A very nice and useful thing is Alexa's ability to make calls to any number you want, just by using voice commands, without having to type anything.

In addition to all of these features, an Amazon Echo Show 5 user can even make video calls through a native tool called Drop In, available only on the Alexa app on other Echo, or via Skype connecting it with the Alexa app.

You can also view both your calendar and email as well as your G Suite account (which, for some reason, Google Assistant can't); ask Alexa to open a browser so that the user can use the internet; view any cameras you have installed in your home.

And if you want to watch movies, you can do that through Amazon Video or bluetooth on your phone. Unfortunately, YouTube and Netflix apps, among others, are not available on this platform.

All three Amazon Echo smart speakers are very strong competitors, with many pros and cons, especially considering their respective price ranges. Here we will list the main strengths and weaknesses of each.

The Amazon Echo 3rd Generation has as its biggest positive point its sound quality, compared to the other two. Their microphones are excellent and capture audio in very large rooms. His cons are mainly the lack of any screen or clock and that Alexa is not that good.

The Amazon Echo Dot 3rd Generation has excellent speakers considering it costs half the price of the previous one. It is extremely beautiful and has very good microphones. Its main cons are, again, the lack of displays, the problems of Alexa and, in addition, the WiFi antenna is not so good.

Finally, Amazon Echo Show 5 has as its only real advantage over the other two the presence of a touchscreen with various configurations and the ability to lock the camera if you wish. However, if you lose a lot of sound quality in return, it may not be worth it.

So what do you think about our comparison of Amazon Echo devices?

Tell us what you think in the comments and if we help you better choose which one to pick. Remember that there are several other smart speakers available, so the choices are not limited to these. If you want an excellent assistant, remember that Google's is undoubtedly the best right now.