Apple's AirPods Pro: Everything You Need to Know

Apple has just announced the newest version of its wireless headphones, the AirPods Pro. This may be surprising to a lot of people, since in March this year the AirPods 2 was released. But even with such a short time between releases, they still have many differences in their capabilities.

AirPods Pro is a version for those who want premium features and is willing to pay more. They even fit well with the new iPhone 11. Now, to find out which Apple phone is worth for you, follow our article, where we will describe all that it is capable of, and compare it not only to its predecessor but also to Powerbeats Pro.

Let's start by talking about the design of the new handset. Compared to AirPods 2, they are a bit smaller, especially when it comes to plastic “cabs”. And there's more innovation in them: Now there's a pressure sensor, which allows the user to control various settings by tightening them.

AirPods Pro comes with silicone rubbers and, As Apple knows that everyone is different, it comes with 3 different sizes of rubber, so the fit is perfect for you. Once the headphones are paired with your iPhone, you can still use a tool to detect the optimal size of rubber for your ear.

Compared to previous versions of AirPods, this is a significant improvement, since they came in only one size, so it didn't fit so well in everyone. When they were released, there were numerous reports of them simply falling from users' ears. 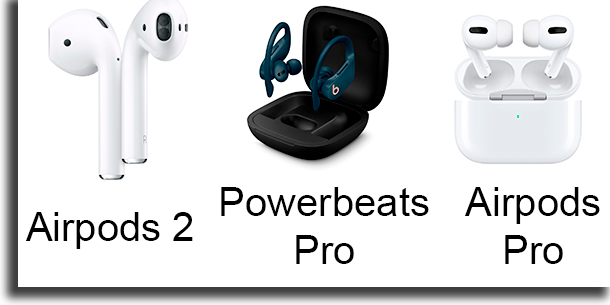 The Powerbeats Pro also has silicone rubbers, but they come in 4 different sizes compared to their competitor's 3. They also have “hooks” to ensure they won't fall from your ear.

If you don't like silicone earphones because of the pressure they cause, don't worry: AirPods Pro has a very innovative air inlet and outlet system, so the pressure feel is a thing of the past. This is a unique benefit of Apple headphones, as Beats doesn't.

If you followed the rumors, you were probably expecting them to be available in more colors than white. Unfortunately, this is not the case, and they are available only in white. Powerbeats are available in several colors: black, ivory, moss green and navy.

The sound quality of the AirPods has never been its strongest point, even though it sounds already reasonable. Now, with adaptive equalization, Apple aims to make AirPods Pro known for their fidelity and audio excellence. It is even comparable to the Powerbeats, which until now were the best in this regard.

Adaptive equalization works by adjusting the low and mid frequencies of songs to the unique shape of each user's ears. In addition, it has a new amplifier with high dynamic range technology that ensures its sound quality is not impaired and can emit lower frequencies of up to 20Hz. 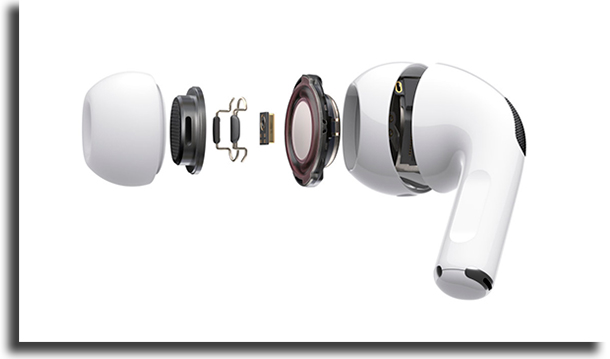 Both AirPods Pro and Powerbeats Pro have a marked difference from Airpods 2: IPX4 certification.

This basically means that this version of the headset is splash resistant. That is, you can go out in the rain or race with them without problem, the only restriction is that they cannot be immersed.

One thing that was lacking in previous versions of AirPods is the cancellation of external noise, which Apple has finally implemented. It works actively, meaning that it is performed through specialized software and two microphones. Thanks to this, the user has a particularly good noise canceling experience.

One microphone is turned outwards and the other inwards. The first one picks up all external sounds and, through the software, emits inverted sound waves, which essentially results in the ambient sounds being erased and you do not hear them.

To ensure no noise is left, the second microphone performs the same process and blocks out any remaining noise. This is all done hundreds of times per second due to the power of the H1 chip that is present in AirPods Pro.

Powerbeats, on the other hand, have reasonable sound insulation due to the acoustic “sealing” it causes when placed in the ear. It's good to make it clear that Apple headphones are far superior in this regard.

If you prefer to hear outside noises, or just don't want to isolate yourself from the world around you, Apple has thought of you too. With Ambient Mode, noise canceling is disabled, and sounds are no longer blocked.

This mode works by leaving the microphone that picks up the sounds, but without the inverted wave emitting. In addition, there is the air inlet and outlet system, which allows the input of external sounds. 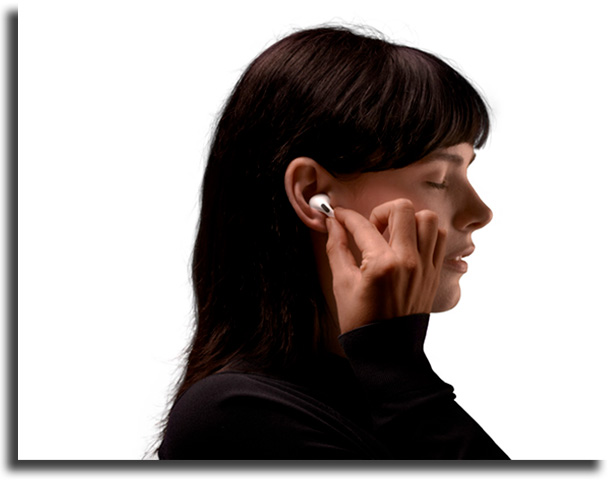 As mentioned earlier, Apple's new headphones have a pressure sensor that lets you control the handset with clicks: play, pause and answer a phone call, a quick click; skip to the next song, two clicks; go to the previous one, three clicks; To turn Environment Mode on and off, click and hold for a second.

Plus, you can control your Airpods Pro completely through your iPhone, or even Apple Watch.

Powerbeats Pro have physical buttons, so it's a less modern design, even though it offers the same controls as Apple's new headphones. In previous Airpods the controls are made by simply touching the headphones.

One of the most common fears when it comes to Apple products is how long the battery lasts. And no need to worry, because they thought about it too: AirPods Pro last four and a half hours with noise canceling enabled; disabled, lasts for 5 hours .; In the case of phone calls, it lasts 3 ½ hours.

By comparison, the Airpods 2's battery lasts 5 hours of audio playback, but only 3 hours for phone calls. Powerbeats Pro, on the other hand, last up to 9 hours on a very good charge when it comes to such small bluetooth headsets. 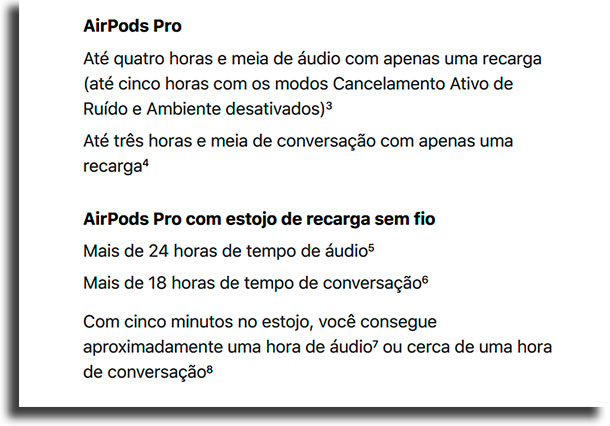 They come with a recharge case included, which is expected considering the price. The case offers over 24 hours of audio playback, or over 18 hours of phone calls. With just 5 minutes in the case, your headphones can keep playing music for another hour, or close to an hour of a phone call.

The case has a standard lightning input, so to recharge just plug it into the included cable or charger on your iPhone. Its design has changed: it is a bit wider to accommodate the erasers, but it is smaller so the size is almost the same as previous versions, and the size of its battery has not changed.

The cases of both previous Apple and Beats headphones have the same functionality as the new one. However, the Powerbeats is much larger, so be a little bit portable.

All three headphones on our list have full support for the "Hey Siri" feature without touching anything. Siri will always be waiting for you to talk to her, ready to make jokes with her at any time. But if it's bothering you and you need to disable it, it's pretty easy. Just look at our article on how to temporarily disable crab on iPhone.

Through the feature, you can control volumes, make phone calls, have your messages read to you and more. This works through the H1 chip, which was also found on AirPods 2, but not in the first version.

AirPods Pro has a tool called Audio Sharing that lets you listen to the same music a friend of yours is listening to by simply bringing your iPhone headset closer to it.

In addition, Siri can read your messages and emails to you as soon as they arrive with the Listen Messages feature. But don't worry, it won't interrupt if it's in a phone call or with Audio Sharing enabled.

One thing to note about all three headphones is that it is basically impossible to repair any of them. So if you buy one, be sure it will not cause damage.

The only way to repair is by sending it to Apple, which charges quite high prices. If your AirPods need repair, it's $ 479 each. That's right, it gives almost $ 1000 to repair the pair. If you lose them, or need to repair the case, it's the same price.

Now comes the bad news: the price is very high. AirPods Pro are listed on Apple's official store for $ 2,249 and, even though not yet available for purchase, by the end of the week will be.

Already their previous version, AirPods 2, are listed in the official Apple store for $ 1349.00. Finally, Beats headsets are available from Apple's official store for R $ 2149.00.

All headsets have a fairly long list of compatible devices: all three are compatible with any device that has bluetooth 4.0 or higher, including android smartphones, even though some features are restricted to Apple products.

Both Apple's new and Powerbeats Pro are compatible with all Apple devices running the following system versions: iOS 13.2, watchOS 6.1, tvOS 13.2, and macOS Catalina 10.15.1 or later.

All three headphones have their merits. They are all good in their own way and have different audiences. AirPods Pro are for those who are after the best, regardless of price, but overlook the assurance that the headphones will not fall and do not need long-term uninterrupted use.

Powerbeats Pro, on the other hand, is for those who are looking for excellent sound quality, they need the guarantee that the headphones will stay where they should: your ears, need a longer battery life, or for those who like to listen to music. while exercising. By the way, if you love exercise, here are our top 20 exercise apps for Android and iPhone.

Finally, Airpods 2 are for those who want a great pair of headphones at a more affordable price. They are not as comfortable to use as the others on the list, and their audio is not as good as the other options, but for the cost difference, almost half the value can make up for it.

What did you think about our review of the Airpods Pro and the comparison we made?

Did you like the news of the new headset from one of the biggest tech companies? Tell us in the comments if you already used any of the other headphones, or if we help you with your choice.

If you have read this far, it may be helpful to read about the best music apps. And remember to look at our comparison of wired and bluetooth headsets and our list of the best iPhone headsets, remembering that it doesn't have the two recent releases we covered in this article.