Best keyboard for Android: 16 apps to try out

Every smartphone comes with a built-in keyboard application. It is through him that it became possible to have a cell phone without keys. The invention of Steve Jobs has revolutionized the market and we hardly see cell phones with any type of keyboard. On the other hand, the standard keyboard is not always the best keyboard for Android.

The big advantage of using another type of app is that you can adapt easier. Especially if you have not gotten used to the native Google app or the manufacturer of your smartphone.

But there’s only one way to know which is the best Android keyboard that suits you: experimenting!

You can use your journal applications or these applications to write and test your writing. Just be sure to use online spell checkers to make sure everything is right!

Without further ado, check out the 20 options we’ve found to help you find the best Android keyboard!

What is the best keyboard for Android?

The Google keyboard is standard on many phones, but there are still models that did not. If you are part of the second group, then GBoard is an interesting alternative.

The app has several forms of typing besides the traditional one. You can use typing by gesture, in which you scroll through the letters at the time of forming the words. It is also possible to open a space for handwriting and even typing by voice, as if converting audio to text.

The best feature of GBoard is the ease of doing Google searches from it. Just touch the company icon and type a term. You are automatically taken to the search results, being able to share what you found if you are talking about a messaging application.

With the proposal to be a private keyboard, that is, an app that does not read what you type, Fleksy is an option for anyone who has sensitive information that can not be read by third parties.

It comes in three different sizes, making it easy to adjust the keyboard to the size of your hand. Flesky has its own selection of emojis and GIFs that you can share in conversations. One of its main highlights is the mechanism that provides the words or sentences that will use.

Next to the Gboard, SwiftKey is one of the most popular keyboard apps. The application was made with the intention of allowing faster typing on the phone, using gesture typing.

It also has various sizes to suit all types of users, as well as a collection of stickers and GIFs. You can also create your own stickers from images in your gallery.

One of the few keyboards paid on the list, despite offering 18 days of free trials. It is one of the applications with the largest collection of themes you can apply to change your look and allows you to create your own. All three previous ones also have their own collection of themes.

In addition, the ai.Type Plus also brings autocomplete function and predicts words you are typing. It also brings a self-corrector, though it serves only for words. To review texts, the ideal is to download applications to correct full texts.

Learn more about ai.Type Plus on your Google Play page. 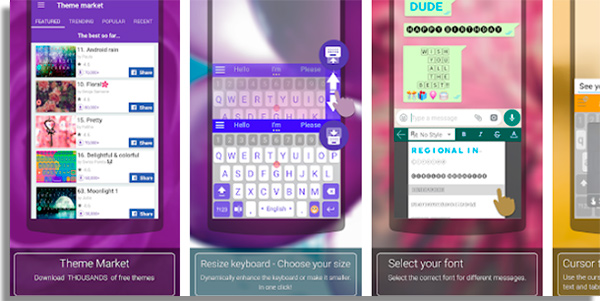 Unlike the apps shown so far, the TouchPal may be considered the best keyboard for Android when we talk about emojis.

Specialized in little faces, their functions revolve around using them in the most fun way possible. It is also one of the oldest keyboard apps out there, completing 10 years of existence in 2019.

Its features include the possibility to create faces in text – type: (͡ ° ͜ʖ ͡ °) -, keyboard by gesture and clipboard making it easy to copy and paste. The TouchPal also brings a tool to predict what you are writing and suggests emojis that you can use in your messages.

An alternative to GBoard that brings more customization. You can define where the key rows and columns will be, for example. In addition, Chrooma lets you change the font style, key size, and theme.

Occupying only 5 MB on your smartphone, it may be the best Android keyboard for those who have little storage available on the phone.

Tip: if you are one of those people, see also our article with games that occupy little space.

Hitap Keyboard remembers what it spells, improving its prediction of words and the tool to autocomplete sentences. Another feature is having several themes at your disposal and the ability to adjust the keyboard size.

That is, it becomes easier to adapt it to your hand. Hitap supports 80 different languages, including Portuguese.

Have you ever had a Blackberry and you miss the time when you typed on a real keyboard? The company’s keyboard app was launched for those who missed this time.

Although it is impossible to put a physical keyboard through an app, it brings the same layout of keys as the original Blackberry. In addition, it predicts and autocomplete sentences in up to 3 languages ​​simultaneously.

That is, if you love mixing the English with Portuguese and maybe a little bit of Spanish, the Blackberry Keyboard will have no problem with that. This keyboard also simulates the feeling of being pressed a physical key.

The best keyboard for Android if you like to see brightness in everything that moves. By the name of FancyKey, we could not expect otherwise. The application is strong in the area of ​​customization, with a good amount of themes, fonts and emojis available.

The app supports 50 different languages ​​in addition to the already traditional gesture typing and autocomplete and autocorrect tools.

Ideal for those who do not like virtual keyboards that occupy half the screen. Minuum is meant to be a minimalist keyboard. You can even type with one hand only if necessary.

Other features of Minuum include gesture-typing, customization of keyboard space and word search in the built-in dictionary, which also supports Brazilian Portuguese. You can also adjust the way letters are arranged on the keyboard if you do not like the QWERTY pattern.

One of the few keyboards that have a built-in translator. That is, you can write in Portuguese and ask him to translate it into English, without the need to use Google Translate or another app of its kind.

The Ginger Keyboard also allows you to have a custom dictionary, and you can insert terms and slang that you use in your everyday life. It is worth noting that it also allows typing by gesture, has autocomplete function and brings a collection of themes to customize your keyboard.

Like the other apps listed here, the Cheetah Keyboard also lets you use themes from your collection or photos from your smartphone’s gallery to customize your keyboard.

It also counts with gesture typing and tools for autocompleting words and spelling correction. The app has its own library of emojis, GIFs and stickers to use in your conversations. 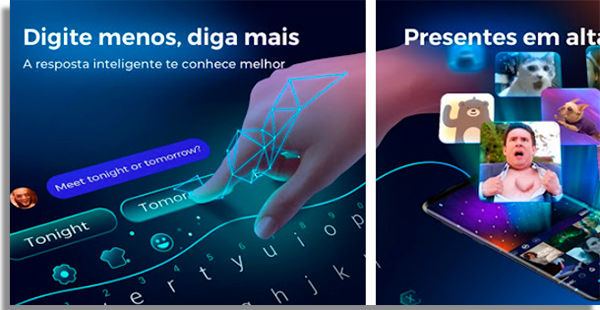 One feature that can convince you to see the Cheetah Keyboard as the best keyboard for Android is its quick response function. The application can suggest responses according to the messages it receives. Very similar to what we see in the quick answers from Instagram!

Despite the weird name, Multiling O is the most appropriate application if you work with more than one language. We say this because it supports incredible 200 languages! Maybe it’s the best keyboard for Android if you work with translation.

Among other functions, it also allows typing by gesture, has several layouts in addition to the QWERTY standard and allows you to customize your own.

Use the keyboard to chat in WhatsApp? Then Facemoji can be a keyboard app right for you. Facemoji brings thousands of emojis, GIFs and stickers that you can use in your WhatsApp groups.

Alongside this, the application allows you to customize the layout of the virtual keyboard keys and provides emojis prediction, making it easy to put them in your messages or bio phrases for Instagram, for example.

The best Android keyboard you can put on your phone if you have an older handset. Like Minuun, Simple Keyboard is lightweight and aims to preserve your RAM.

It does not contain spellcheck or word prediction like most apps in the list, but its use is simple and fast, perfect for those who do not have much freshness at the time of writing.

You can change the size it occupies on the screen and your download is less than 1MB.

Unlike the previous item, Typany does not skimp on features. It brings a wealth of emojis, stickers and GIFs, plus allow you to create your own in an internal editor. Another interesting feature of it is the internal translator, allowing you to write in your native language and have your translated message right away.

Alongside this, he lets himself use the keyboard as a framework for sketches and scribbles, uses artificial intelligence to predict words he uses frequently, and brings his own collection of themes to customize his experience.

What is the best Android keyboard in the list?

Now that you know a number of apps to enhance your writing experience, you can choose which one is the best to use on your phone.

Want to know the best place to test them? So check out this article with various app options to annotate on Android!