Competitors of the iPhone 12: which are the main ones?

We know that for those who like Apple or iOS smartphones, the iPhone 12 is the best option you can find now. But for those who were in the mood to switch to Android or for those who don't want to pay so dearly for a device with little news, there are alternatives. But after all, what are the main competitors of the iPhone 12 so that you can make your choice?

We separate and list exactly the smartphones that can rival the iPhone 12 in some way. To see who these iPhone 12 competitors are, just read the full list below!

To begin our list of competitors for the iPhone 12, you can't ignore the one who hits head on with the Apple smartphone. For years, the iPhone and Samsung's premium devices end up being the main options for those looking for the best option on the market.

With the Galaxy S20 we saw an impressive leap in technology, both in its cameras and in the 120 Hz screen. The smartphone itself is very powerful, since it comes with the Snapdragon 865 chip and no less than 12 GB of RAM.

Other than that, it comes with at least 128 GB of internal storage and has a micro SD card slot of up to 1 TB. As you can see, it is one of the best options for those who prefer Android.

Taking advantage that we are talking about Samsung devices, it is worth mentioning the Galaxy Note 20 Ultra. It is a very good option for anyone who wants a smartphone with a stylus, whether to draw or take notes anywhere.

Like the S20, it comes with the Snapdragon 865, 12 GB of RAM and 128 GB of internal storage. What changes is that in addition to the stylus, it has a very large screen, 6.9 inches.

Its shape is also more angular instead of rounded, so it is good to take this into account if the design weighs in on your decision.

Even though it is not as well known among Brazilians, the OnePlus 8 Pro is considered one of the best smartphones in the world. As you can imagine, this also means that it is one of the best competitors for the iPhone 12.

It is worth mentioning that the device still supports 5G, a refresh rate of 120 Hz and optical zoom.

For some years now, Google has decided to compete directly with Samsung and Apple in the smartphone market. After years of making great intermediaries under the Nexus brand, they started to focus on Pixel and make only premium devices.

The Pixel 5 was recently announced and surprised to bring a more modest configuration than its competitors. It features the Snapdragon 765G chip, 8 GB of RAM and 128 GB of storage.

But its most famous aspect, the camera, remains one of the best on the market. Fortunately, it is much cheaper than the Galaxy S20 and iPhone 12.

Since we're talking about Pixel among iPhone 12 competitors, we think it's a good idea to mention Pixel 4a. He is a very interesting intermediary and that can be an excellent cost-benefit for those who were watching the Apple smartphone.

It comes with the Snapdragon 730, 6 GB of RAM and 128 GB of storage. Other than that, your camera, as expected, is fantastic on both the front and the rear.

The 5.81-inch screen and 2340 × 1080 resolution is also great for those who want a smaller device than conventional ones.

Following our indication of the OnePlus 8 Pro, we will also talk about the OnePlus 8T. It is a newer model, which despite being on the same level as the Pro, is quite impressive.

Their cameras are also slightly inferior, but only in relation to their older brother. Overall it is an excellent option for those who want to have a OnePlus, but do not mind having small inferior aspects.

Another smartphone that could not be missing from the list is the Huawei P40 Pro. In addition to being very powerful, like so many devices mentioned here, it is considered one of the most impressive in terms of the camera.

Many say that it gets to be the best camera in the world on a smartphone, to get a sense. But other than that, it is worth mentioning that the device has the Kirin 990 5G chip and 8 GB of RAM.

If you were thinking of purchasing an iPhone 12 through the camera, it is worth considering the P40 Pro before making your final purchase.

It's hard to imagine that you haven't even heard of the Galaxy Z Fold, as it was one of the first smartphones with a flexible screen on the market. Except for not having such a perfect design, it ended up being left aside by Samsung itself.

Fortunately, the company learned from this situation and brought the refurbished Galaxy Z Fold 2. It not only has a huge screen when opened, but it also has an external screen on the front when it is closed.

The device also features the new Snapdragon 865+ and no less than 12 GB of RAM. It is an interesting option for those looking for iPhone 12 competitors, especially if you want something very different.

If you really liked the Galaxy S20 FE, but want an iPhone 12 competitor that is even cheaper and has a good cost benefit, we present this option. The S20 FE is a more affordable version of the common model.

It has the Snapdragon 865 and 6 GB of RAM, in addition to 5G support and a 120 Hz screen. The biggest difference is the screen resolution, the amount of RAM and the quality of the camera.

But it is still a very impressive smartphone, especially at the asking price. 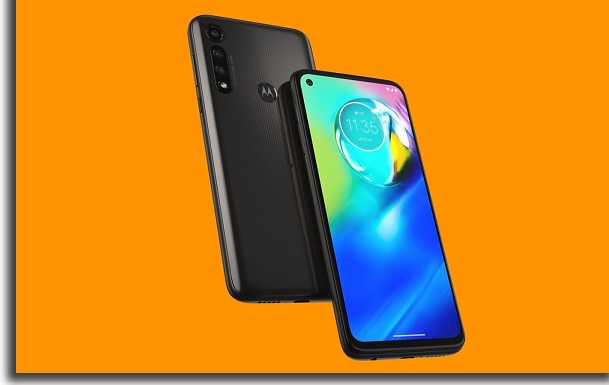 To close our list of the biggest competitors of the iPhone 12, we have a somewhat unusual choice. We haven't seen Motorola devices compete with the premiums in the market for some time.

Still, you can't discard them when you consider certain aspects. Moto G Power, for example, is the perfect choice for those who want an inexpensive intermediate that lasts even more than a day of intense use.

It has the Snapdragon 665 and 4 GB of RAM, which does not look so impressive. But it is enough to run any app and game without noticing slowness or crashes.

What matters is that we have no less than 5,000 mAh of battery in a device that doesn't require a lot of energy. Basically, you can check everything you need throughout the day without worrying about having a battery until you get home.

Certainly, one less concern for those who have to think about carrying the iPhone all the time.

Read too: What to do when the iPhone is inactive

What did you think of the iPhone 12 Competitors?

Did you take advantage of our list to learn more about the competitors of the iPhone 12? So don't forget to leave your comment telling us what you think of the options and which one caught your attention the most.