Docker for Windows: what is it and how to use it?

If you are someone who is interested in software development, ie creating applications for operating systems, you may have heard of Docker for Windows, a highly improved new implementation of the relatively old service you use. the same name, the Docker.

This service essentially allows the user to create containers with various application information and code to make it easy to deploy and operate on different operating systems in a very simple way.

1. What is Docker for Windows?

It is an open source software project which is meant to ensure that it is safe as all of its code is openly available to anyone who wants to see to check for any irregularities. In addition, it can be changed by the user after downloading, without any problem, copyright that allows its change.

Docker for Windows is a platform developed in the Go language created by Google; It is a very high performance software that ensures easy development and administration of isolated environments, which ensures that the application will reach the end user very quickly. 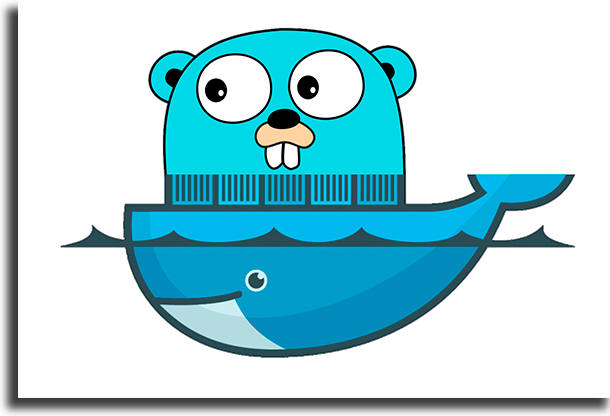 It is intended to create, test, and deploy programs in a separate environment other than the original machine or device; This environment is called “container”.

Thus, the developer can package software in a more standardized way, which is only because the platform offers several basic execution functions.

Environments, or containers, can be run either externally, through the cloud, or internally, locally on the machine itself, to perform tests or the like.

Docker, besides being the name of the program that allows it all, is also the name of the software developer, which has contributions from several other major technology companies, such as Google, Microsoft and IBM.

2. How to install Docker for Windows?

If you develop programs and are interested in a way to send your applications to the end user more simply, it's a great idea to consider using Docker to do this. Therefore, we will instruct you how to install this excellent platform on your computer.

First of all, it has some basic requirements that are required to be able to begin the installation process. First, you can't unfortunately have an edit Home You need one of the following editions: Pro, Enterprise, or Education, at or above 15063.

In addition, installing Docker for Windows also requires that both the "hyper-v" feature and the Windows container tools be enabled. If you do not know how to do this, just follow the steps below.

There are several ways to enable these tools; The first of these is through Windows PowerShell: To do so, open this tool in administrator mode and then run the following commands:

If a message appears stating that the command cannot be found, make sure it is running in administrator mode. Then be sure to restart your computer.

The second is using the command prompt (CMD) in conjunction with DISM, a tool that helps you configure both Windows and operating system images. Then simply open CMD or PowerShell as an administrator and execute the commands

The third, and last, is through Windows Settings: first, right-click the Windows icon on the taskbar and click “Apps and Features”; then click "Programs and resources", on the right; go in “Enable or Disable Windows Features ”, select Hyper-V and Containers and click ok. 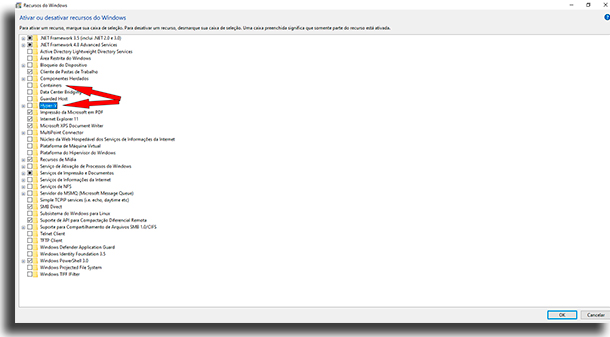 For error-free running of Docker for Windows, the following hardware requirements are also required: a 64-bit SLAT-capable processor (like all i3, i5, i7, and i9, among others), 4GB RAM, and virtualization support enabled in the BIOS.

To check if your CPU supports this tool, just download the “coreinfo” tool from this link, extract it, open a command prompt as an administrator, go to the folder where you extracted it using the “CD” command and typing in the location and then type command coreinfo -v.

A short list of information will appear, among which EPT if you use an Intel processor or NPT from AMD. Beside this section, you will have an asterisk “*” if your processor has SLAT, or a minus “-” if not. 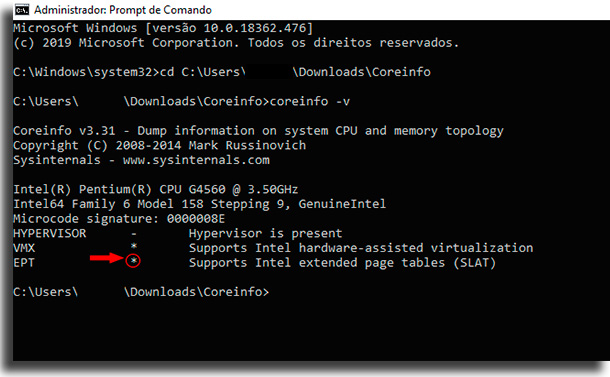 To enable virtualization in the BIOS, your computer must be turned off. Then click the power button and click the button to go to your BIOS, which is usually Delete. Go to the processor settings and enable it “Intel Virtualization Technology“ or “AMD-V”depending on the manufacturer.

BIOS options may be under different names, depending on the manufacturer of your motherboard or notebook. In this case, search for the specific model. Then just click on Save & exit.

Now that all this is done, you can finally install Docker for Windows on your computer. To download the application, follow the link. After downloading, open the installer and follow the installation instructions, accepting the user license. When you're done, just click Finish that it will be installed.

This Docker for Windows installer contains several tools. These are Docker Engine, Docker CLI Client, Docker Compose, Docker Machine, and Kitematic. Containers and images created by Docker are shared between all machines that have the application installed, with login performed.

To verify that the installation was successful, you can perform a simple check through the command prompt or PowerShell. Open it and enter the following command: docker run hello-world. 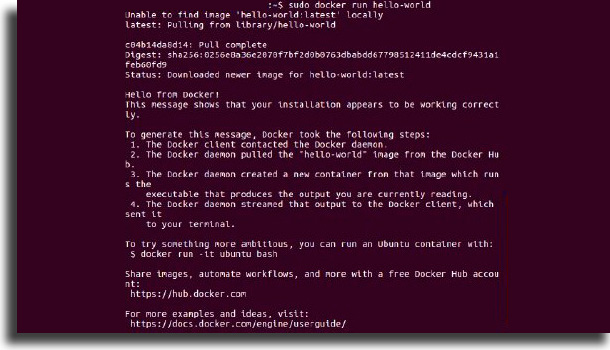 Now that the Docker for Windows tool is already installed on your computer, let's talk about its full capabilities, what it does, and how to get the most out of the platform in question.

The vast majority of midsize and large companies use applications such as ERPs and CRMs, which are software suites, to perform the functions of this platform. The problem with this is that because they have a single, old source code they become inefficient in the long run. 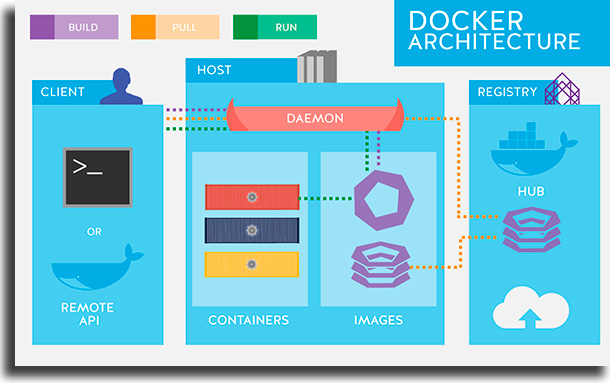 For this, came the tool called docker, which solves the problem through several steps; The first one is the decomposition of the program into several microservices, which are smaller parts, which allows developers to implement a more appropriate architecture for the operation.

This is only made possible because the source code is specific to each of the microservices, which allows software to go through more than one stage, such as test, virtual, and production environments. In each case, the performance must be consistent, which is allowed by the container, which packages the components in a lightweight file, which allows them to perform well in any environment.

Docker for Windows, in turn, communicates via the API between the client and server; For this to happen, the service must be installed on site and point the client to the right server.

It uses the Linux kernel and kernel features such as "Cgroups" and "namespaces" to segregate processes, allowing them to run completely independently, which is the main purpose of containers, ensuring the possibility that several processes and programs are run separately and use the best possible infrastructure while providing high security.

Tools of this type, including this one, use a different type of image-based deployment, which makes it easy to share applications and their dependencies in different environments. They also serve to automate the deployment of applications or the processes that form them in the environment.

The technology that docker uses for containers is quite different from that of traditional Linux containers, even though its initial development was based on LXC. Nowadays, it has distanced itself from that, as LXC is only useful for lighter virtualizations, but its experience was quite poor.

Docker for Windows offers, in addition to the ability to run containers, greater ease in creating and building them, sending and versioning images, and many other tools.

In standard Linux containers, applications run entirely as one due to the init system used. In Docker, there is a strong incentive for them to be divided into several processes, offering all the necessary tools for this, which has some advantages.

Let's begin by explaining the modularity: Since Docker runs applications in a compartmentalized way, it is perfectly possible to disable some part of the program in question, for whatever reason, without completely disrupting it. Plus, it's easy to share processes across multiple applications.

Now, speaking of the layers; Each Docker for Windows image file is made up of several of them, which are combined to form the final image. Whenever there is any change in the image, even a copy command, a new layer is created.

When creating new containers, layers can be reused to make the creation process considerably faster and future changes are shared between images, further increasing speed, size and efficiency.

The best version control comes from this, since whenever something changes, a changelog is created. The possibility of an easier rollback is probably the best advantage guaranteed by using layers, as there are always changelogs on everything, making access and rollback to previous versions much simplified.

Finally, the rapid deployment offered by Docker for Windows is critical to overall technology development, as it reduces the time it takes to get new hardware up and running from hours or days to mere minutes, while reducing the cost. It also facilitates upgrades, something else that had high costs.

Having a container for each process can simply share similar processes with new applications, which becomes even faster as no operating system is required for this. 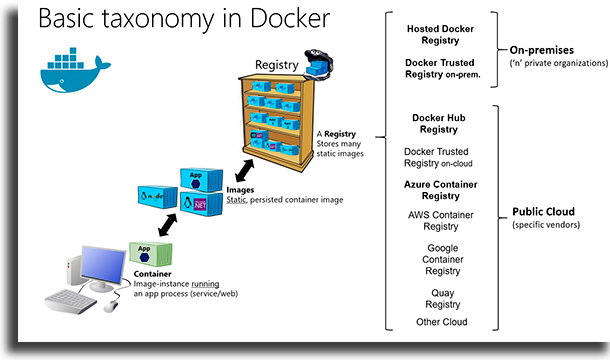 So what did you think about our article about Docker for Windows?

Leave a comment if you have learned something new about software development, if you already knew about this platform or if you think we have forgotten something important. s