Facebook Gaming or Twitch? Which one is the best?

If you like streaming and want to become a professional in the field, Belive is one of the most recommended tools for this. It has integration with some of the biggest live tools. Follow our link and start using it!

In this article, we will introduce and compare two of the biggest game streaming platforms: Facebook Gaming and Twitch. Read on and find out everything about them.

What are each of the platforms?

Both are very complete game streaming services, which offer certain different features and come from quite different origins. In this first section, that's what we're going to talk about.

She arrived in Brazil in 2018, being really easy to use: just have a Facebook account and set up the streaming program you will use to start making your game live. To watch, you don't even need an account: just go to the website fb.gg and choose what you want to see!

It has a dedicated app for Gaming, which was launched in January 2019. However, it is exclusive to Android, so that those who use iPhone have to watch it through the main Facebook app.

Highly recommended for everyone who wants to stream, Ciclano is compatible with Facebook Gaming. It is a program that allows you to manage your lives completely, improving the experience for you and your audience. Follow our link to get started!

Twitch is a well-established live streams service, launched in 2011 as a Justin.tv spin-off. In 2014, it was acquired by Amazon, having several integrations with Amazon Prime.

It has more than two million streamers and more than 100 million monthly viewers, making it the most used streaming site in the world.

Like Facebook Gaming, it is an easy-to-use platform, allowing anyone to stream or watch. However, as a major advantage over the competitor, it has a dedicated app for both Android and iPhones. 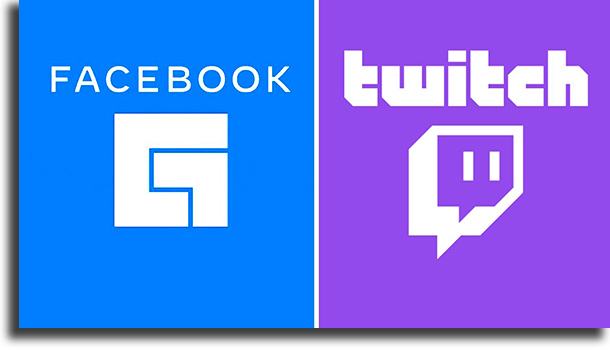 As much as we have already mentioned, we will address this better here.

Both services are multiplatform, with versions for both computers in internet browsers and smartphones. The main difference comes from the fact that, while Twitch has versions for both iOS and Android, Facebook Gaming has an Android-only app.

This is not for want of attempts, however, as the App Store has repeatedly rejected your app. Still, as it can be accessed through the main Facebook application, it can be said that there is a tie.

Very important to know is how easy (or difficult) to use these apps to make lives. Here, we will talk about both the web interface and the smartphone interface.

First, we'll talk about what it's like on the computer.

The Twitch website has a very simple and easy to use interface, showing the main streamers at the top, recommendation sections, categories recommended for you, the recommended channels on the left and even recommendations for streamers for specific games.

Facebook Gaming has an interface similar to that of Twitch. As soon as you open it, you will come across the featured video from a Facebook partner. Below you can see recommended streams, encouraged content, suggested games and streamers and more. As with Twitch, there is also a menu of suggestions for you to find what to see.

It depends on the preference of each user, which interface he prefers, but that of Twitch is clearer and easier to use, since more information is shown at the same time (being still well organized), while on Facebook you have to scroll a lot to find What you want.

Now that we’ve covered what it’s like to use on your computer, let’s briefly buy apps for both services.

The Twitch app is divided into three main sections: "Following", "Find it out" and "Search for". The first is where you will find the streamers you follow. In the second, you will find suggestions and recommendations of what to watch. Finally, on the third you can search and find new channels. It is very easy to use and navigate, being very intuitive.

Facebook Gaming is more complex and complicated to navigate. It is divided into four sections: "Timeline", "Play","To explore" and "Posts". At first, you will see the most popular content of the moment. In the second, you can play inside the app. In the third, you can browse games and streamers. In the last one, you can chat with friends about the games.

In short, Twitch has an interface and usability that is in fact superior to the competitor.

It is in this section that Twitch completely defeats Facebook Gaming, as the social media giant's service offers no reward. Twitch, however, offers channel points through which viewers can participate in personalized activities.

In addition, it has several partnerships, such as Blizzard, giving rewards as you watch certain streamers.

If your business is not game lives, but on Instagram, we recommend using Instago, which helps you manage, control and make your live much easier. Follow the link and start using!