Galaxy S20: everything you need to know about the new smartphone

As usual, February is the month that marks the arrival of the new generation of Samsung's flagship smartphone line. The main novelty is already in the name of the new edition, which will not follow the established pattern of the previous ones. Instead of Galaxy S11, the successor to the Galaxy S10 will be called Galaxy S20!

Through a live broadcast, the new specifications, screen and details about the camera of the new device were revealed, as well as its special editions.

Despite being the star of the day, the Galaxy S20 was not the only participant to be present. A new foldable smartphone was also announced, as well as the next edition of the Galaxy Note, the Galaxy Tab tablet and accessories like the Galaxy Buds and the Galaxy Home Mini.

Want to know everything that happened during the event? Then check out our full summary on the Galaxy S20 reveal!

The Galaxy S20 was not the first device to be shown, but that was not why the presentation was less impactful, since it brought the successor to the Galaxy Fold, Samsung's first foldable smartphone.

Called Galaxy Z Flip, little has been revealed about the device's specifications. In this case, the presentation focused on design details, such as the colors that the smartphone will be available. It will reach the markets in purple, black and gold, which will have a limited run for some countries yet to be confirmed.

Some features with the Galaxy Z Flip were shown, such as the possibility to see notifications, messages and times without opening the smartphone. In addition, it will be perfectly possible to take selfies with the device in that position. 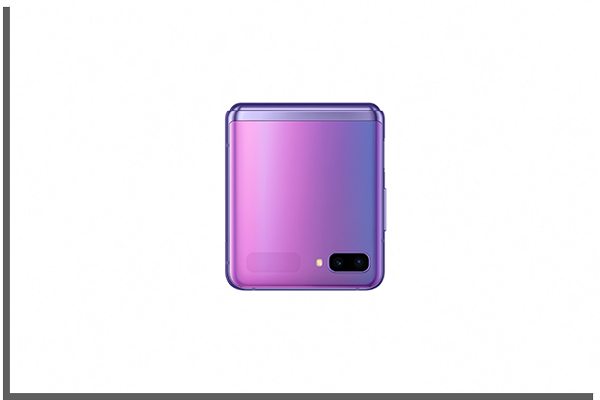 It can be used at different angles, in a mode called Flex Mode. It will allow you to use your smartphone in several positions, not just closed or open. In addition, each half of the screen will work with multi-window, allowing you to open different applications simultaneously.

Camera specs and details were not revealed, but the Galaxy Z Flip screen protection mechanism was shown, which uses fibers to prevent dust and dirt from entering, as well as preventing scratches when the screen is closed.

Check below the technical specifications of the Galaxy Z Flip.

The primary screen of the Galaxy Z Flip has an impressive size of 6.7 inches. It is equipped with dynamic AMOLED technology and the Flex display mentioned above. Its resolution will be 2636 x 1080 and pixel density of 425ppi.

The screen on the cover and used when the smartphone is closed is 1.1-inch Super AMOLED, 300 x 112 resolution and 303ppi.

The Galaxy Z Flip will hit the market with a dual camera at the rear and just a front camera for selfies. At the rear, the main camera will be 12MP angled with 78 ° field of view and digital zoom up to 8x.

The second camera also comes with 12MP, but it is ultra-wide for panoramic photos, with a viewing angle of 123 °. The front camera is 10MP and the field of view is 80 °.

The Galaxy Z Flip will come with a 7 nanometer octa-core processor, with 2.95 GHz main core and complementary 2.41 GHz and 1.78 GHz cores.

It will have 8GB of RAM and 256GB of storage, standard for premium smartphones today. The Galaxy Z Flip will also arrive with the current edition of Android 10.

Tip: did not understand anything from the data above? Then check out this complete guide for you to understand what comes inside a smartphone!

The Galaxy S20 is revealed!

It didn't take long for the Galaxy S20 to be demonstrated. After a speech by the president of Samsung's mobile division Koh Dong-jin, the first demonstration of the next generation of the company's smartphones began!

The Galaxy S20 processor will be the same and the configuration will depend on the country of launch and the operator that will sell the smartphone. Both are 7 nanometer octa-core processors.

The difference is in the cores. The first has a 2.7 GHz core, with 2.5 GHz and 2 GHz secondary cores. The second option is more robust in the primary core, which will be 2.8 GHz. The secondary ones will be 2.4 GHz and 1.8 GHz.

Now, see the RAM and storage settings for each of the three editions below.

With a focus on higher quality, the Galaxy S20 will have cameras that together will add up to 108 MP of resolution, in addition to the use of artificial intelligence for corrections and improvements in photos. One of the highlights is the 100x spatial zoom, which allows you to zoom in 100 times digitally and 30x optical zoom.

That is, you can zoom in on an image 30 times without losing photo quality. The single take mode uses the device's AI to take multiple photos of the same image. Then she introduces you all to choose the one you like best. AI will also be used to organize your photo gallery.

Regarding the video, the Galaxy S20 will be able to record in 8K. With just one touch, you can send videos recorded on your phone to Samsung TVs that are also capable of playing 8K video. The camera also has Super Steady stabilization, correcting involuntary movements such as the famous “shaking”.

This camera will be available in all editions of the Galaxy S20, where the event was also recorded. The only difference is in the standard edition compared to the + and Ultra editions. The common Galaxy S20 has a triple camera at the rear, while the other versions come with a quad camera.

Another feature of the new Galaxy S20 cameras is the 9-in-1 pixel pinning, made possible by the smartphone's largest image sensors. This technology simply combines 9 pixels into just one on the sensor, making it possible to switch the resolution from 12 MP to 108 MP that we discussed earlier.

The Galaxy S20's display will not skimp on size. All three editions will come with impressive sizes and perfect news for those who like multiplayer games for mobile.

The first is the frequency, which was 60Hz in previous editions and will be 120Hz, adding much more fluidity to the game. In addition, the sensitivity on the touch screen has also been doubled, making it easier to send commands in games that require agility, such as MMO games.

Going back to screen sizes, see below the display specifications for each edition of the Galaxy S20.

5G connection and partnerships for the Galaxy S20

Support for the 5G connection will optimize the integration of the Netflix app with Samsung smartphones, which will also offer bonus content on Netflix series for Galaxy S20 users.

Use of 5G that will allow you to download Netflix movies offline quickly to watch on your phone if you have to disconnect soon, as recommended on air travel.

Another highlight is also the partnership between Samsung and Google, which intend to revitalize the Google Duo video calling app. Through 5G, the application will be able to make video calls in better quality without dropping the transmission, in addition to enabling the sending of video messages.

In addition to the calling app, whoever buys the Galaxy S20 at launch will also win a subscription to the YouTube Premium streaming service. It will also be possible to share content in 8K on the video platform.

Samsung also announced a partnership with Microsoft for the launch of the Forza Street car game, which will arrive first at the Samsung app store. The title will take advantage of improvements on the device's screen, such as the frequency rate of 120Hz and greater sensitivity in touch controls.

In addition, the 5G connection was also mentioned as a highlight for the use of xCloud, a Microsoft project that allows its fan base of Xbox consoles to play console games on the mobile screen by streaming.

Rivaling Apple's Air Pods, Samsung introduced the second generation of rival Galaxy Buds +. A 40% increase in quality has been promised over the original Galaxy Buds.

In addition, Samsung headphones have a partnership with Spotify, making it easy to access your favorite playlists with the simple press of a button. It is also one of the few headphones to feature two internal and one external microphone, improving the quality of your voice recording on calls.

Its battery lasts 11 hours and can be charged wirelessly. It is also worth mentioning that the Galaxy Buds + will be compatible with iOS devices, also serving iPhone and iPad users.

The Samsung Galaxy Buds + hits the market next to the Galaxy Z Flip on February 14, 2020. It will cost $ 149, about R $ 645 according to the exchange rate on the date of publication of the article.

Finally, the moment comes that everyone has been waiting for: when the Galaxy S20 hits store shelves and, more importantly, how much will the three editions of the smartphone be available for?

The three versions will arrive next month, on March 6, 2020. Check below the suggested price of each one and the colors that will be available.

It is worth remembering that the date marks the launch of the cell phone in American territory and in other countries. It has not been revealed whether Brazil is on this list of countries, so it is possible that it will be launched later here.

What did you think of the Galaxy S20?

Did you like the Galaxy S20 specs or did they fall short? For you, what was the most exciting revelation? Comment with us and discover also the best offline games for Android!