Did you know that you don't have to be afraid to chat with foreigners on WhatsApp? If you've ever wondered if Google Translate translates conversations on WhatsApp, we have some good news for you.

The answer is a resounding yes! But calm down, don’t think we’re going to say that you just copy the message, open a Google Translate window and then paste the message to receive the translation.

None of this, translating WhatsApp messages and games is as simple as it sounds. Of course, it is necessary to have both the Google Translate app and WhatsApp itself installed on your Android or iPhone.

Having this tool at your disposal is ideal for learning languages, as it allows you to talk to someone from outside the country and, when you have that question, get help from the tool.

Next, we'll show you how to use this Google tool to translate your WhatsApp conversations!

The first step we already took up there: download the Google Translate app on your smartphone. Now, open the application and choose the option Take a tour. 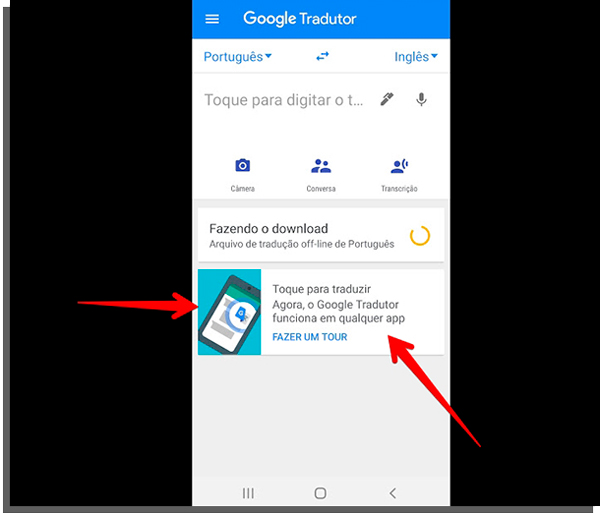 Proceed to the option Activate. By doing this, you will allow Google Translate to translate in applications outside of it. That is, it is this function that allows you to translate messages without having to open the translator for that.

Tip: it is worth mentioning that, when activating this option, you will also be able to translate everything you receive in messaging applications or even posts in other languages ​​on social networks.

If your Android is above version 6.0, you will also need to give an authorization on the system itself. However, by clicking Activate, you will be taken directly to that screen.

There, just click Authorize so that Google Translate is able to translate messages sent in other apps.

Now that everything is ready, open a conversation on WhatsApp with any message you need to translate. Double-tap that message or copy it.

A Google Translate button will appear. Touch it.

Now, the translation will appear! By default, Google Translate translates from English to Portuguese. If necessary, just click on the language above the original message and choose any of the options.

How are the conversations translated?

Now that you have found the answer to the question “Does Google Translate translate conversations on WhatsApp?”, Your possibilities for interaction and training in other languages ​​have just increased.

Being able to chat with people from other countries is one of the best ways to learn your language. Not only that, but also its culture, stories and references, among many other possibilities.

So there is no shame in using tools like Google Translate to expand your knowledge.

As we mentioned before, the tool is used to translate text in almost any type of app that contains text in another language, making it essential for anyone who is learning another language.

To learn more about Google tools, be sure to also check out our comparison between Alexa and Google Home, two smart home systems you can use to make your routine easier!