iPhone 12 Mini, Pro and Pro Max: what is the price / quality ratio?

Recently, Apple not only introduced the iPhone 12 to the world, but also exhibited several variants. We now also have the iPhone 12 Mini, Pro and Pro Max models. All with slightly different features and prices to suit other types of users. Of course, with so many models presented at once, it can be tricky to know exactly which one is most worthwhile and what is similar or different.

To help you understand the great particularities of each model, we have listed all the different characteristics of each one. You can check everything in detail below! 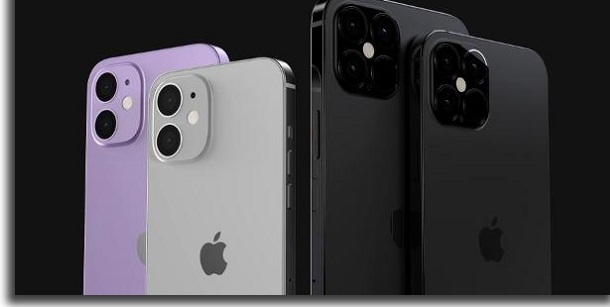 To start our comparisons, it is worth talking about the design of the new iPhones. Basically, they are all very similar in appearance, with a very minimalist design and more rounded edges.

There is still a black notch on the front, covering a piece of the display of the iPhone 12, iPhone 12 Mini and company. This to make room for the front camera, the Face ID sensor, etc.

It is in the rear that we see a small difference, since the iPhone 12 and the Mini have two rear cameras, while the Pro and Pro Max have three cameras.

Apart from the black detail that is on the upper part of the display of all models, their screen does not have so many other similarities between them. The characteristics of each can be seen below:

Basically, we have the same screen on the normal iPhone 12 and the Pro version. Meanwhile, the Mini version clearly has the smaller screen than its name already implies and the Pro Max comes out with the largest display, but the lowest pixel count per inch .

Each device also has very different dimensions in large part, except only the normal iPhone 12 and the Pro version, which are the same. We detail the height, width, length and thickness of everyone below:

As expected, the iPhone 12 Mini is the smallest and lightest, while the Pro Max is the most similar to other current smartphones in terms of size and weight.

As for the cameras, surprisingly, there are not so many differences between models. For starters, they all have the same 12 megapixel front camera and all devices are capable of recording 4K videos.

This makes it much easier when deciding between one of the models, since many people end up choosing the smartphone for the quality of the camera. In this case, you just need to know if you want the third lens on your iPhone or not. 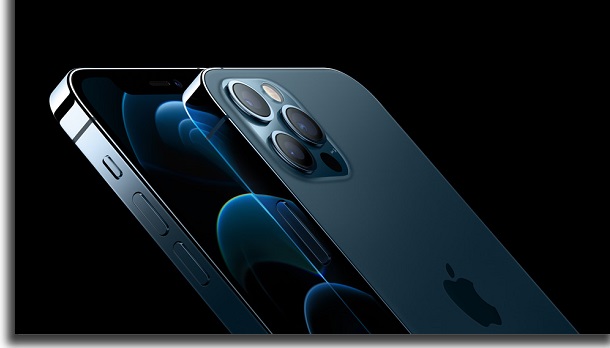 As expected, these devices still lack a fingerprint sensor. Instead, they have a more secure and updated version of Face ID, so you can unlock the device with facial recognition.

Other than that, of course, you can also choose to unlock with passwords or patterns.

In terms of the processor, there is not much to say, since they all have exactly the same chip. All new iPhones have the Apple A14 Bionic chip, the latest developed by the company.

For some reason, Apple did not disclose the amount of RAM in its devices, but it was not long before the information was discovered. Apparently, the iPhone 12 and the iPhone Mini have 4 GB of RAM, while the iPhone 12 Pro and Pro Max have 6 GB of RAM.

This should be sufficient for most users, especially with the optimizations that Apple can have on its devices. Still, it is worth noting that today it is common for intermediate devices to already have between 6 GB and 8 GB of RAM.

The differences continue when it comes to storage, as Apple opted for a very strange decision with cheaper devices. Both iPhone 12 and iPhone 12 have 64 GB of internal storage as the most basic option, while the Pro and Pro Max have 128 GB of minimum storage.

This may not seem like a problem at first glance, but you must remember that none of the models have the option of a memory card. That is, you will only have the internal space of the device to store all applications, games, photos, videos and other types of files.

With apps and games getting bigger and bigger, and media files also taking up more space for 4K quality, the 64 GB of the cheapest iPhones become worrying.

This is an old complaint from the company's consumers, who see it as a tactic to force them to spend more on products that should be more affordable. So it is good to keep this factor in mind when buying your iPhone.

If you have no option but to buy the 64 GB version, we suggest that you place all photos and videos on cloud services and leave only the apps and games installed on the device.

As expected, Apple also did not disclose the exact size of the batteries for each model. Instead, they just mentioned that the iPhone 12 and Mini are capable of 15 hours of video playback, while the iPhone Pro and Pro Max are capable of 17 hours.

Of course, even with this parameter alone, you can expect to be able to use them for at least a day until you have to charge your iphone. This is even more so if the iPhone is idle for a few hours a day.

An important factor to mention is that none of the devices have a charger inside the box. You will receive only one Lightning cable and the other end with USB-C.

As this is not the same standard as old devices, you will have to buy a completely new and compatible charger or use the old charger and cable you already have at home.

It is also worth mentioning that the devices are compatible with wireless charging and MagSafe technology. For those who complained that the iPhone does not charge quickly, know that this is exactly the technology that allows this type of charging.

As you might expect, there is no headphone jack. Then, you will only have input for Apple's proprietary Lightning cable to charge your device.

Of course, you can use an adapter if you have conventional headphones. Otherwise, it is better to simply use a Bluetooth headset, which may be the official Apple or another brand of your choice. 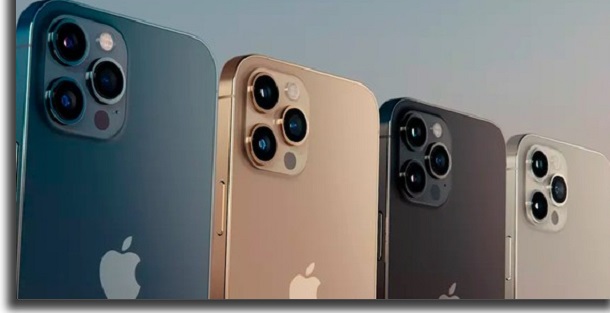 Who likes different colors on their smartphone, may end up preferring the iPhone 12 and the Mini. After all, they are the most colorful and vibrant, while the iPhone 12 Pro and Pro Max have more serious colors.

Basically, the iPhone 12 and the Mini can be purchased in black, blue, green, red and white. The iPhone Pro and Pro Max are available in blue, gold, graphite and silver.

As is to be expected, Apple should not release more colors for these iPhones unless it runs a charity campaign as it did in the past with the red iPhone.

As it happens every year, the new iPhone 12 also leaves the factory with the latest version of iOS, Apple's mobile operating system. This time, we are talking about iOS 14, which has not yet been officially released on other devices.

This will only happen with the launch of the iPhone 12, which occurs later this year. It is also worth mentioning that this device will also receive future iOS updates for at least 5 or 6 years in a row.

After months of speculation and rumors, Appel announced the iPhone 12, Mini, Pro and Pro Max on October 13, 2020. The pre-sale of the devices did not take long to start, which happened on the 16th the same month.

The official launch is scheduled for November 13 in the United States. It has not yet been announced whether this date will also apply to Brazil, but it is known that the device has already received approval from Anatel.

So, it is to be expected that your arrival in our country will not take long.

Anyway, we have one of the most anticipated aspects about the iPhone 12 Mini and the other new models of the Apple smartphone: the price. Although many of the devices have several similarities, prices do vary widely.

Factors such as cameras, battery, display size, storage and RAM memory count a lot in the price of each one. In order not to complicate too much, we will talk about the base price of each one, that is, with the most basic storage.

After all, this is the only issue that can really increase the price, with larger warehouses costing more. We will also show the original price in dollars and what was disclosed in reais.

They are definitely very salty prices, even on the cheapest version of the iPhone 12 Mini. Even more so when we consider that similar or more powerful devices are much cheaper than iPhones.

Having seen the main aspects of each iPhone, it is clear that the iPhone 12 mini ends up being the best in terms of cost-benefit. It has the same settings as the normal iPhone 12, with only a slightly smaller screen.

And even though it's a smaller screen, it still has a pretty standard size for what we see on most devices today. Considering that there are no edges around the screen, your space is used even more.

Of course, if you want more basic storage, more RAM and an extra camera, the iPhone Pro may be the best option.

Do you like the iPhone 12 Mini and the other new models?

Did you understand more about the differences of the iPhone 12 Mini and the other new Apple smartphone models? Will he overcome the problems of the iPhone 11 and iPhone XR? So don't forget to leave your comment telling us what you think of them and which one caught your attention the most.

Also don't forget to see our guide on what to do when your iPhone won't turn on or how to unlock your iPhone if you accidentally locked it.