Quarantine with family? 20 series to watch

For many, staying at home means being quarantined as a family. While the presence of everyone in the house at all times may seem strange – especially for those who are not used to working at home – it also means greater availability to marathon series together.

These series can be found in apps for watching movies and series, especially Netflix and Amazon Prime Video.

Ready to join the family in this quarantine and watch series suitable for any age? Then check out our full list below!

What is the best Netflix series for family quarantine? A series about families!

With nine seasons, Modern Family will surely accompany you for a long time. From 2009 to 2018, the series portrayed the daily lives of three families, also linked by family relationships.

The first is composed by the couple Phil and Claire, with their three children. The second is formed by Claire's father, Jay, in his second marriage to Colombian immigrant Gloria, considerably younger than he, with his 11-year-old son, Manny.

The last family, on the other hand, consists of Mitchell, Jay's second son, and his partner Cameron, who adopt little Lily, a Vietnamese orphan baby.

The series humorously illustrates everyday family conflicts and jokes about the generational differences a family faces. Modern Family brings excellent jokes in a light comedy, as well as tender family moments, but without ever missing the joke.

Ten of the 11 seasons – which ended this year – of Modern Family are available on Netflix. 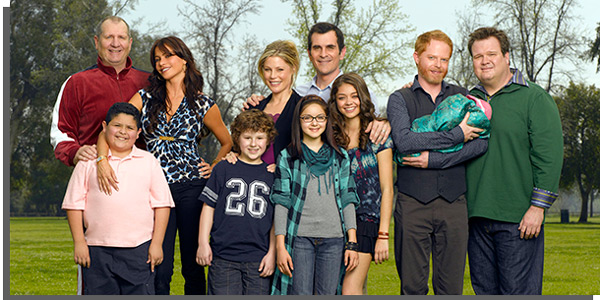 The Office is one of the most popular sitcoms today, even though it ended in 2012. The series is aired in the form of a pseudo recording of a documentary that portrays the daily life of a company located in the small town of Scranton, Pennsylvania.

Throughout its nine seasons – which ran from 2005 to 2012 – The Office plays with corporate stereotypes, business jargon that makes no sense and bosses with no sense of reality, while accompanying the lives of employees who are forced to deal with that.

Despite having a more absurd footprint, those who are used to working in offices will still be able to identify with some situations portrayed in the series starring Steve Carrell.

The Office is available on Amazon Prime Video.

Once a famous and successful lawyer, Jeff Winger's career is suddenly suspended by a “detail”: his university degree is false!

Seeing himself obliged to go to college to resume his career, he signs up for a community college, which are less expensive, but without the same prestige as traditional universities.

Despite the sharp lip, things do not work out for the “lawyer”, who finds himself stuck in a study group formed by totally opposite personalities, which yields good jokes in the series. However, the grace of Community is not in the characters themselves, but in the various satires of cinema genres and stereotypes.

80's action films, science fiction films and even Martin Scorsese's mobster features are satirized in several episodes of the series, making it one of the best comedy series to enjoy in this family quarantine.

Community has 6 seasons and is available on Amazon Prime Video and Netflix.

While the series shown so far are mainly comedy, an easier genre to reach all audiences and that certainly helps to improve the mood in the quarantine, it is not necessary to be stuck with it. 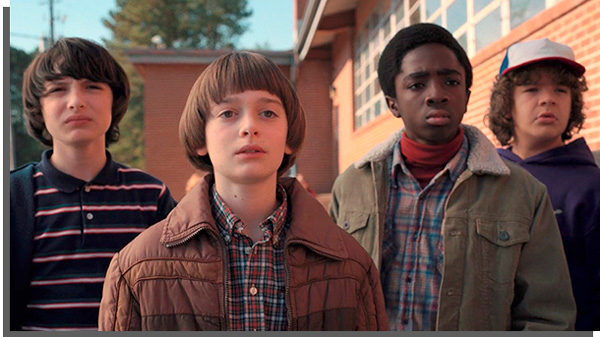 Even the suspense series can be enjoyed by everyone and Stranger Things is a good example of that. Filled with tributes and references to famous toys and series from the 80s, in Stranger Things we follow the story of a group of friends who live in a small town in the United States.

The peaceful and playful life is interrupted after the sudden disappearance of one of the members of the group, followed by the encounter with a girl with no name and special powers.

Inspired by conspiracy theories and monsters from another dimension, the three seasons of Stranger Things manage to balance moments of comedy, suspense and action in one of the best Netflix series.

Despite the resounding success, Glee is one of the few series of musicals of great public. The series follows a group of teenagers who belong to the school choir, little regarded and even antagonized by other teachers and students at the school.

With memorable performances, epochal songs and sensitive themes about growth and relationships, Glee can generate identification in most teenagers today.

All seasons of the series are available on Netflix.

With four seasons, The Good Place is a series that serves both to have a good laugh and to think about philosophical questions about our existence and morality. Even with children at home during quarantine, the series has a good amount of funny and absurd scenes, which can please them.

After dying in an accident, the protagonist – with nothing exemplary behavior – wakes up in what is called Good place, where people who scored more points of goodness than badness in life go.

What appears to be a miracle soon dissolves: the protagonist was mistaken for another person of the same name, an altruistic lawyer who fought for environmental causes. Not to be sent to the Bad Place, the protagonist will now have to adapt to the place, while deceiving everyone in Lugar Bom that he is a good person.

The Good Place ended in 2020 with four seasons and is exclusive to Netflix.

A six-episode miniseries, Good Omens is the adaptation of a book written in 1990 by Terry Pratchett and Neil Gaiman. The plot tells the story of the angel Aziraphale and Crowley, who unite to prevent the prophesied apocalypse, which would come in the form of the coming of the antichrist and would be the definitive war between Heaven and Hell. 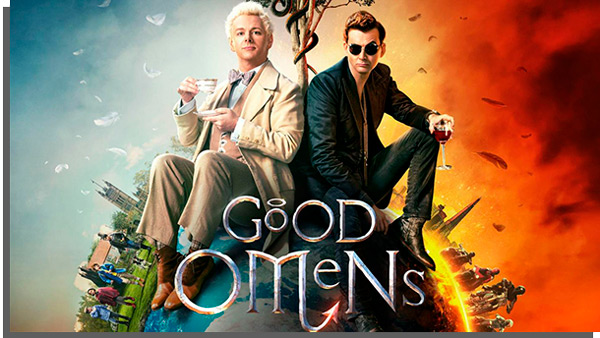 But why would an angel and a demon unite, instead of taking their positions in the inevitable clash? The reason is simple: after millennia on Earth, they have become attached to human life and do not want the planet to end.

Good Omens has only one season of six episodes. That is, perfect for marathoning in the family quarantine. The series is available exclusively on Amazon Prime Video.

From one of the creators of The Office, Brooklyn 99 is a fun police series that follows the daily lives of the investigative team at the 99th New York City Police Station, located in the Brooklyn neighborhood.

The series begins with the arrival of the new captain of the police station and how his leadership – totally opposite to the previous management – affects the team, especially the protagonist Jake Peralta. Although genius, the detective does not take his job seriously, clashing with the serious personality of the new captain.

In addition to this first conflict, we can also see the routine of the other researchers, each with their own personality and antagonisms. The series stands out for not adopting the same serious tone as other police series and for the way it distributes screen time and interactions between its various characters, always generating unusual and funny situations.

Brooklyn 99 is still in production and currently in its seventh season, with six of them already available on Netflix.

A full plate for Harry Potter fans, The Magicians follows a premise very similar to one of the most famous wizards in literature and cinema. In the series, the protagonist is accepted into a secret institution specializing in magic.

In it, he will discover that everything he read in books about fantastic worlds really exists. Both the interesting part and the dangerous and deadly part.

Called Escola de Magia here, the series brings special effects that impress and a journey of discovery for the protagonists, while trying to save this new world.

The Magicians is available on Amazon Prime Video.

It is almost impossible not to know one of the most acclaimed comedy series of the 1990s, even though it was born after it ended in 1995. Starring a much younger Will Smith, A Madman on the Block – Fresh Prince of Bel-Air, in the original – puts the hitherto unknown star as a poor boy who is sent to live with the wealthy part of his family.

Going to school together with his cousins ​​- who live in a world totally different from his – the series brings several comic strips in the relationship between Will and his new family. It is from this series, in fact, that we have the iconic “Carlton dance”, still famous today.

A certain rarity, A Freak in the Piece is available on both Netflix and Amazon Prime Video.

Remake of a classic 1970s series, One Day at a Time tells the story of a family of Cuban immigrants in the United States. Composed by a mother, her two children and her grandmother attached to traditions, the comedy series deals with the cultural issues of immigrants in the country and generational conflict in a light and comical way.

One Day at a Time is available on Netflix.

Another series that appeals to nostalgia, Everything Sucks is ideal for showing the little ones what the last decade before the turn of the millennium was like. 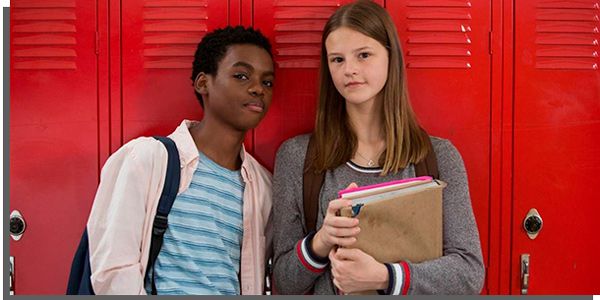 Taking place in an American city in 1996, the series shows the routine of a teen group from that time, where things like smartphones and streaming services didn't exist and we didn't even dream of going through a global quarantine one day.

Everything Sucks is available exclusively on Netflix.

With a protagonist with traces of autism, Atypical shows the life of a teenager from his search for a girlfriend and also for independence. The overprotective mother ends up having to adapt to this new situation in this series that reveals many issues that tend to be left out of traditional family conversations.

With three seasons, Atypical is available on Netflix and its latest episodes will be released in 2021. Starting now during the family quarantine ensures that you will be up to date for the launch of the final season.

A direct continuation of classic Três émais, the series shows the misfortunes of D.J, a veterinarian from San Francisco who becomes a widow when she is about to have her third child. To help with the arduous task, she receives help from two friends, one of them with a teenage daughter.

The series portrays the difficulties of living together and the creation of the three children, full of unusual and comical situations. Emmy nominated for Best Children's Program, Fuller House has 5 seasons and is available on Netflix.

Ideal for the little ones or those entering adolescence, Series Unfortunate Events brings the story of three brothers who have been orphaned and are looking for a home. However, the distant relative of the villainous Count Olaf is always on his trail, in search of the brothers' inheritance.

Lived by Neil Patrick-Harris, immortalized by the character Barney Stinson in How I Met Your Mother, Series Unfortunate Events brings all the elements that a fantasy series has to please children and young teenagers.

Series Unfortunate Events is available on Netflix and has 3 seasons. 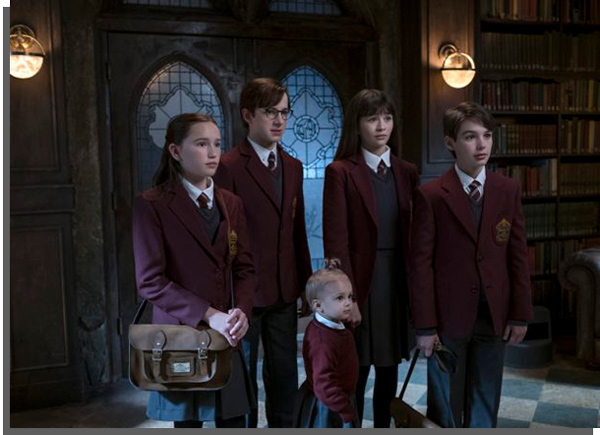 Family Quarantine – which series will they start with?

Now that you know some of the best options to spend this quarantine with your family, which one seemed the best to enjoy with everyone?