The 21 best comedy series you need to watch

There is nothing better than finding new shows to watch, especially if they are your favorite genre. Perhaps the biggest problem is actually finding something when there is so much content and different apps for watching movies and series. For those who like to watch comedy series, for example, there are many options. But of course there are comedy series that are a must for any fan of the genre.

Therefore, we have separated a list of the series that you really need to watch. Among the options, there are classic and newer series, so there is definitely something for everyone. Check out more below! 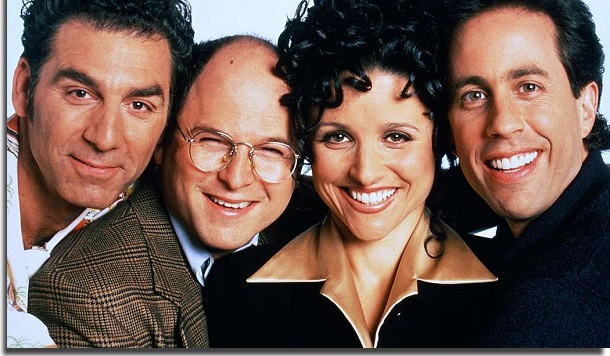 To start our list, we must mention Seinfeld. This is not only considered the best comedy series ever made, but it also occupies lists of the best series in the world in general, regardless of genre.

She was the sitcom to popularize the well-known format of a group of friends living certain situations in the big city. Only his concept was always that the series was about nothing.

Instead of looking for absurd situations to put your characters, the series has always tried to insert them into everyday events that happen to anyone. Of course, this worked very well, as the series continues to be seen and praised to this day.

A few years after Seinfeld debuted and popularized his format, several other series tried the same success. The one that really managed to win over the audience at that time was Friends.

It follows the same pattern as Seinfeld, but with a much lighter tone and slightly more cartoonish characters. The series had 10 great seasons and ended up leaving fans wanting more.

So much so that we always see rumors and possible chances of meeting in a new episode or even movie in the series.

Even if you haven't watched it, it's quite possible that at least you've heard of The Office. The British series was so successful that it was retrofitted in 10 other versions around the world.

The most famous adaptation is the American one, which you should also already know. In general, the premise is to accompany an office where several people work and try to spend time in a minimally more interesting way.

Everything is recorded as if it were a documentary, which makes the series much more interesting. We will recommend the original British series, as it is still considered the best version in terms of quality.

Since we mentioned Seinfeld, we also couldn't forget the other series from one of its creators: Curb Your Enthusiasm. Created and written by Larry David (co-creator of Seinfeld), the series follows a fictional version of himself.

It is as if we followed his life after Seinfeld ended in everyday situations. Except that as Larry is a bit picky about everything and everyone, these situations always escalate to something bigger.

The series itself is very funny and any comedy fan should watch it. But something that makes it even better is that virtually all dialogues are improvised by the actors, who only know what needs to happen during the scene. 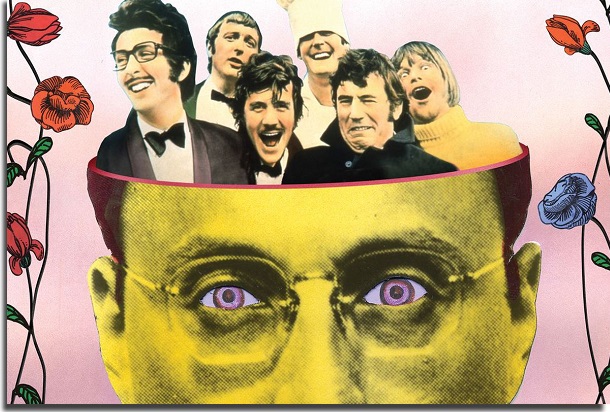 If you like British humor, Monty Python’s Flying Circus is a series you cannot miss. It aired from the late 1960s to the mid-1970s, and remains a huge success and influences comedians around the world today.

It is basically a series full of sketches from the humor group Monty Python. For those unfamiliar, they are practically considered as the Beatles of humor.

There are also countless excellent quality films by the group and you can check them out on Netflix if you want. We guarantee that there are not many current comedians who have not been inspired by them.

If you don't like the sitcom format so much, but still want an interesting American comedy, we can recommend Brooklyn Nine-Nine. She follows several stories of a police station and its investigators.

Everything is done with a lot of humor, of course, even in apparently violent crimes. The series already has 6 seasons and there is still no forecast to end.

Veep may not be as well known in Brazil, but it is quite successful in the United States. She accompanies a former senator named Selina Meyer, who recently had the opportunity to hold the post of vice president of the USA.

With that, we see the backstage of her political life and her support for something to happen to the president so that she can occupy the post herself. It is easily one of the best comedy series on our list.

Another good American comedy in a different format is 30 Rock. In it, we accompany Liz Lemon, the main screenwriter of a comedy sketch program.

She has to deal with the pressure of her job, her arrogant boss and many eccentric celebrities. Everything is kind of based on the experiences of the actress, screenwriter and director Tina Fey at the time she worked for the Saturday Night Live program.

For those who like sitcoms, but looking for a different environment, our suggestion is That ’70s Show. As the name already means, the series takes place during the 1970s.

We accompanied a group of teenage friends during that time, as they grow up, graduate, get jobs and think about what to do in the future. Of course, the series is full of old references, including when the first Star Wars movie opened in theaters, for example.

More recent than many others on our list, The Good Place is one of the best comedy series of today. It shows the story of a very egocentric woman who died and ended up in paradise by mistake.

In order not to have to leave, she starts doing everything to change her actions and thoughts. It really is worth checking out, even if you usually watch Netflix series, since it is available on the platform.

This is another sitcom that became very famous and got a lot of fans over its 9 seasons. It starts with a man named Ted wanting to tell his teenage children how he met their mother.

With that, we went back to 2005 and went through countless memories of Ted and his best friends. Only it takes a long time to finally reach the moment when he met his future wife, as the number of seasons already indicates.

The series itself is very funny and indispensable for those who like sitcoms. It is worth mentioning that the end of the series was decided from the beginning, since the scenes were recorded in advance so that Ted's children would not look much older if the series was successful and lasted a long time.

Louis follows a line a bit like Curb Your Enthusiasm. She also follows the life of a very famous comedian, Louis C.K, who plays a fictional version of himself.

Despite being a comedy, it is definitely a little depressing. Episodes rarely have a positive conclusion, so it’s good to take that into consideration if you’re watching.

It is logical that we could not fail to include some animated series on our list. South Park is easily one of the best comedies ever made and comes out ahead of many other live-action ones.

It has no less than 22 seasons, each of which addresses themes from its own time. Believe it or not, each episode is done in about 6 days, so they can really touch on current issues.

For those interested, there is a movie and some very good games based on the design. The creators of the series even made one of the most successful and award-winning musicals on Broadway (The Book of Mormon), so you can see that quality is not lacking.

If we're going to talk about comedy animations, The Simpsons couldn't be missing either. Slightly in front of South Park, this series already has 30 seasons and should continue for some time.

They also always address current issues, although they are not as fast as South Park when it comes to producing their episodes. Some say that the peak of the series has passed years ago, but it is still very fun and funny.

If you're a fan of Will Smith, chances are you've watched at least a few episodes of Fresh Prince of Bel-Air. Even after 30 years since its debut, the series remains funny and very entertaining.

It tells the story of a teenager named Will who is sent by his mother to live with his wealthy uncles in a privileged neighborhood in California. As his life was much simpler and different before, he and his family have some adaptation problems.

Like The Office, the Extras series is also created and starring comedian Ricky Gervais. This time, he plays an actor who works more as an extra in films and series, but who dreams of becoming a successful actor and screenwriter.

Each episode features a very famous actor playing a super exaggerated and self-centered version of himself. They always interact with Ricky's character and that obviously creates very funny and shameful situations.

Like almost every British series, the seasons have few episodes, but they are all excellent. It is one of the best comedy series on our list.

Undoubtedly, the oldest work on our list is still considered one of the best comedy series to date. I Love Lucy aired in the 1950s and even though it is so far from our current reality, it remains very funny.

The episodes were focused on the life of a housewife who tried several jobs to enter the show business business. It is really worth it if you want to see something classic and that propelled several comedies on American TV.

A good recommendation for those who like different comedies is Arrested Development. It shows the life of a family that used to be successful in their business, but whose patriarch ended up being accused of fraud.

They lose practically everything they have achieved and the eldest son has to try to maintain some sanity in the family. The series has always had high praise from critics, but a somewhat weak audience led to its cancellation.

Fortunately, Netflix has not only obtained the rights to make the series available, but has also ordered new seasons. So, there is no better time to start watching the series.

Another good suggestion for those who like American comedies is Community. It shows a group of adults who decided or needed to attend a community college in the United States.

The characters could not be more different from each other, which always ends up generating controversies between them. It is a very light and fun comedy to watch to distract yourself.

To close, we have a series well known to Brazilians. Mr. Bean has always been very successful here, especially since the British series has practically no dialogue, which breaks any language barrier.

She has the main character in various everyday situations that are becoming absurd. Believe it or not, there are only 15 episodes that have been shown over 5 years.

All of them were very successful and made the character Mr. Bean one of the best known in British TV worldwide.

Did you take advantage of our list to get to know some of the best comedy series ever made? So don't forget to leave your comment telling us what you think. Also tell us and if there are other series that you would like to have seen here.