If on your last trip (before quarantine, of course) you had a hard time communicating with people from other countries, you may be looking for a way to make your life easier next time. For this, we have selected the best voice translator apps.

Read on to find out exactly what they are and what benefits each brings.

We started our list of apps with translation tools with speech recognition by Google Translate, one of the best known. It is capable of translating up to 103 typed languages, in addition to supporting bilateral conversations in up to 32 languages.

Their translations tend to be very correct and good, being highly recommended. In addition to translating in writing and by voice, he can also translate images, manuscripts and more. Download it now through the Play Store or the App Store. 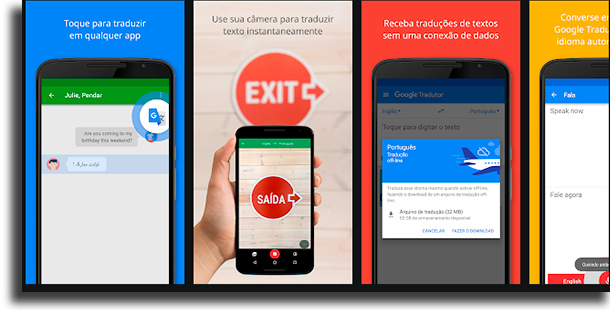 Among the apps for voice translators, we have Microsoft Translator, offered by Microsoft. It offers really good translations by text, by photos from your camera, directly from the camera and even offline.

It also translates voice, allowing up to 100 people to talk to each other in several languages, as it translates them in real time. If what you want is just translation of spoken phrases, it is also possible. Follow the link to download for Android or iPhone.

Bringing with it translation capacity in more than 100 languages, iTranslate also allows its users to switch between different dialects and choose which voice they want to hear when the app speaks.

Offers dictionaries of synonyms and different meanings, phrase book and translation sharing option, among many more. In its premium version, we find the option to translate voice-to-voice conversations for multiple users. Download from the Play Store or the App Store.

Talkao Translate is one of the voice translator apps that is specialized for those who need to perform audio translations, with options in more than 110 languages ​​with voice input in each one. It is very light and easy to use, always fulfilling what it offers besides allowing the sharing of translations with other apps.

It helps you with spelling corrections, facilitates the process of learning other languages, either by speaking or writing, suggests words to use and has a complete dictionary. Check out all this and more on the Play Store or the App Store. 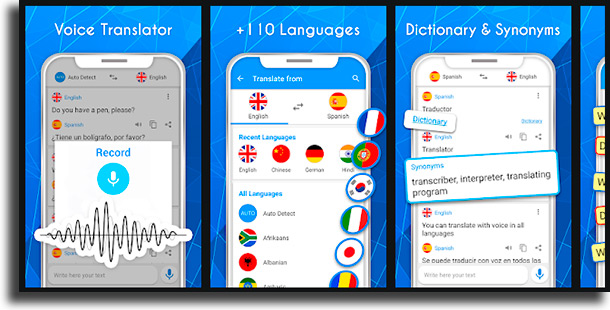 One of the best voice translator apps is Yandex.Translate, which does much more than just translate, bringing several options for use in its simple, intuitive and beautiful interface.

It is particularly focused on its offline mode, allowing you to download the main languages ​​to use them when you are offline. It also has a complete library of terms, synonyms and meanings for you to enjoy fast and efficient translations.

In addition to obviously translating voice and allowing conversations, it supports 95 languages, translates photos, reads translations, translates entire pages directly through the app and much more. It is available for Android through the Play Store and for iPhone through the App Store.

Speech & Translation is one of the best translation apps, as it is supported by Apple's speech recognition technology. Recognizes and translates voice in real time, in a very streamlined way, in up to 54 different languages.

If you prefer to translate texts, it has support for up to 117 languages, in addition to speech support for text in 14 languages. In the premium version of it, you have no advertisements, translate unlimitedly and can use offline. Go to the App Store to download this exclusive iPhone app.

An excellent option among voice translator apps for those who don't like Google Translate, Reverso is one of the best alternatives to it. It offers quick translations of words and expressions, in addition to integrating several examples on the context of sentences and is full of new educational terms.

Its interface is quite simple, being ideal for use in studies or in practical situations, such as when traveling. It also makes it possible to create vocabulary lists from the examples it gives you. Download from the Play Store or the App Store. 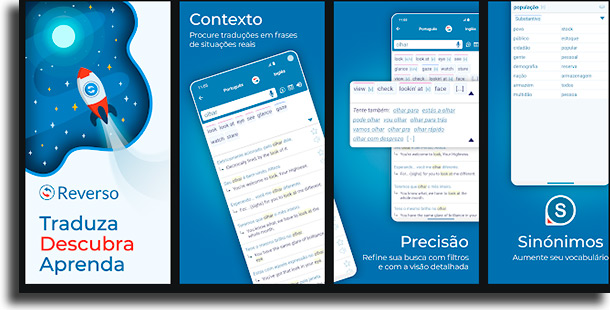 Finally, we have the interpreter, who can easily capture voice in real time, convert what was said into text and then read it out loud in one of the more than 100 languages ​​it offers, using only an internet connection for that. .

It has a very simple interface, all you have to do is choose which language to speak and which one to translate to, click on the microphone and speak. There, you will receive the result and it will be spoken!

It also allows the sharing of texts on social networks, emails and other platforms and apps without having to close the app. Follow the link to the Play Store to start using it.

What did you think of our selection of voice translator apps?

Leave in the comments if you already knew them all or if we present you with a new alternative (better than the one you used). Don't forget to also check out our guide on translator for Brazilian sign language and how to use Google Translate offline!