The biggest celebrities on TikTok: Top 20

One thing that a lot of people have in common at the moment is the boredom caused by quarantine. One option to relieve you is to watch videos on social networks and, to help you find what to watch, we've selected the biggest celebrities on TikTok.

To check all the names, read on and see the names and links for each one!

The first person on our list is a big teen star, Maisa Silva, who has been on TikTok for a long time. Originally he gained his fame for his several appearances on SBT, presenting Bom Dia & Cia from the age of 6, the Saturday Animado and the Sunday Animado and also participating in the program of Sílvio Santos.

Currently, he appears on the network doing make-up, dancing, doing several TikTok challenges, dubbing his old videos and more, all with an air of great fun. It has more than 4.5 million followers and almost 15 million likes. To see more, follow the link to your page. 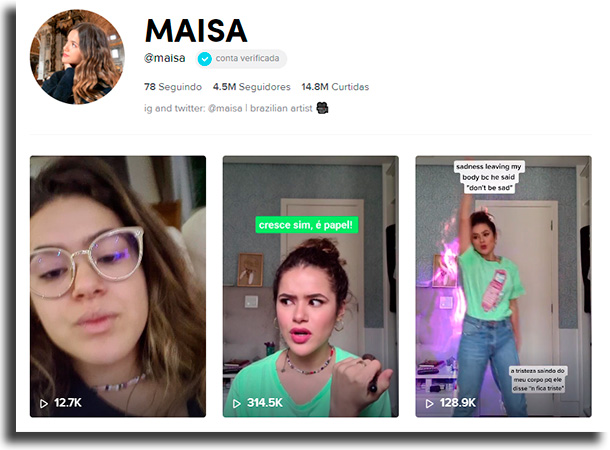 Everyone knows Justin Bieber, who became extremely famous after 2010, when he released the international hit "Baby". Followed by numerous controversies, he was arrested after several problems with the law, which eventually forced him to mature and even change his musical style.

He joined TikTok to promote his single, “Yummy”, which encouraged his fans to use the music in their videos to reach trending. His focus on the platform is to do fun dances with his wife. Check it out through the link.

Another famous singer is Selena Gomez, 27 years old. She became extremely famous on Instagram, being the first celebrity to reach 100 million followers on the social network.

On TikTok, your videos are about funny and entertaining dances and some comedy videos. It currently has over 17 million followers and almost 30 million likes on the platform. See your profile by clicking here!

One of the biggest drag and LGBT icons in Brazil, Pabllo Vittar, is another of the biggest celebrities in TikTok. He started his career singing covers and rose to fame by creating albums exposing his experiences of suffering bullying and homophobia.

His musical style is quite varied, with pop hits, electronic forró and arrocha, among other mixtures. He primarily makes comedy videos, in addition to concert announcements, some dances and lip-syncs on TikTok, which is available for you to check out via the link.

Renato Aragão, or Didi Mocó, is one of the greatest comedy icons in our country. He worked in several areas, as well as being an actor, voice actor, screenwriter and director, in addition to several others. He became famous when he led the series Os Trapalhões, in the 1970s, where he played Didi.

On the video network TikTok follows his comedy, even though he is 85 years old (which proves that the platform is for anyone!). He is making several comedy videos with his wife during the quarantine. Click on the link to see it right now.

Among the most famous and beloved presenters in the United States, Ellen DeGeneres is a great lesbian icon who joined the network. His humor is well known internationally and now those who know English but live here can also get to know him better.

He is creating comedy videos for the network, in addition to posting several jokes and moments of relaxation for his show on TikTok, which allows him to get even closer to his existing audience (and expand it). At the moment, it has more than 5 million followers and 49 million likes. Go to her TikTok through the link.

If you like funk or pop, you probably know Anitta, who is also well known by the LGBT public. He started his career in 2010, when he posted a cover on YouTube and signed with Warner in 2012, with the release of the song “Show das Poderosas”.

Just like on Instagram, she is quite famous on the platform and posts videos where she dances, where she sings and even comedy videos, with lip-sync. It has 2.4 million followers and the same number of likes on the largest platform for short videos. See your profile through the link.

Terry Crews, first known for his role in “Everybody Hates Chris” and later in one of the best comedy series, Brooklyn 99, is certainly one of the funniest actors out there and one of the biggest celebrities on TikTok.

Much loved by his audience, he joined TikTok where he makes some of the best comedy videos from TikTok, makes several of the biggest challenges with his family, sings and even dances. It currently has almost 9 million followers and more than 26 million likes. Click here and check it out!

One of the biggest and best-known boy bands of all time, the Jonas Brothers made their name from 2005 and 2013, when the band went on hiatus, and came back in 2019 with the same three vocalists.

They released a single, “What A Man Gotta Do”, which served as an announcement of their new era and their new shows (which unfortunately were canceled due to the coronavirus pandemic). At TikTok, they make several comedy videos, dance, sing and show backstage. They have 5.6 million followers and 40.2 million likes. To see them, follow the link.

Anyone who follows the reality TV shows, specifically “A Fazenda”, possibly knows Marcos Mion, a comedian who started his career in the early 2000s on MTV. Its focus, since 2010, is the presentation of the most varied reality shows.

At TikTok, he creates videos with his children and family. It is a lot of comedy and a lot of dancing, be it alone, with your children or even with your dog. It passes the 400 thousand followers and reaches almost 900 thousand likes. If you are interested in checking your posts, just click on the link.

Another famous Brazilian singer, Ludmilla participates mainly in the genres Pop, R&B and funk melody. Her fame started on YouTube, with the song “Fala Mal de Mim”, under the name “MC Beyoncé”, which she was forced to abandon eventually. His success really came in 2013, when he signed with Warner.

He has posted several comedy videos, some related to our current situation of having to deal with the coronavirus, as well as videos where he dances and sings. It has over 1 million followers and 1.5 million likes. Follow the link to see your TikTok.

A well-known Brazilian actress and presenter is Juliana Paes, another of the biggest celebrities in TikTok, known for her diverse roles in prime time soap operas, starting in 2000. She even participated in soap operas like “Caminho das Índias” and “A Força do Querer ”, in addition to being the poster girl for Antarctica.

It has very beautiful posts on Instagram and recently joined TikTok, using the effects of the app to further increase its popularity on it. It has more than 300 thousand followers and more than 250 thousand likes. To check your profile, just follow here.

Who doesn't know Dwayne “The Rock” Johnson, famous for his performances, his wrestling past and for playing football professionally? He is one of the most likable personalities on TikTok, with many fans.

He loves to play games, participate in challenges, dance, post funny videos and even post parts of his life on the network. It has over 20 million followers and 100 million likes on TikTok. See him through the link.

A very famous actor and comedian, Will Smith was nominated for five Golden Globes and two Oscars, in addition to winning four Grammy Awards. He reached stardom when he participated in “Um Maluco no Pedaço”, which lasted six seasons. Afterwards, he started acting in several films, including "MIB – Men in Black".

He makes lip-sync videos, comedy videos, some dances and many other things. The comedian has almost 22 million followers and almost 110 million likes on the platform. Check it out by clicking on the link right now.

An actress, comedian, singer and director, among several other categories of the kind, Tatá Werneck had her debut on a TV show in 2008 and participated in the “Fifth Category” on MTV, in addition to several other programs until 2012.

Post several comedy videos, videos where she does some funny dances, lip-sync and more. It currently has almost 800 thousand followers and almost 820 thousand likes on its profile, which can be accessed here. 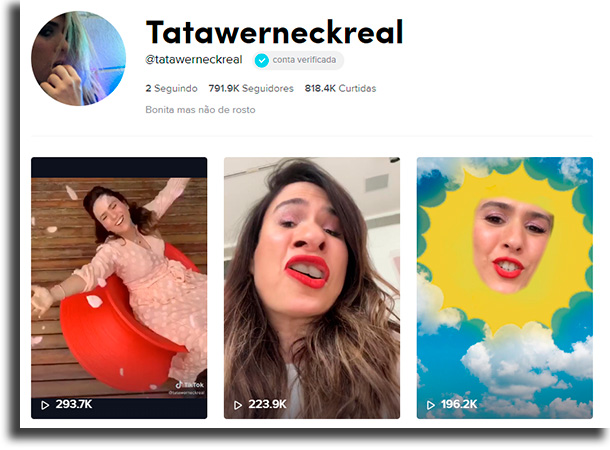 Another of the biggest celebrities in TikTok is Alok, a very famous DJ who started his career by making a pair with his brother on tours around Brazil. Eventually, he decided to pursue a solo career as a DJ and has since accumulated several related awards.

He really likes to interact with his fans on the platform, using the filters offered for fun. Post comedy videos of all kinds, no matter how few appear. It currently has 1.2 million followers and 3.5 million likes. To see your posts, just follow the link.

Anyone who likes k-pop certainly knows BTS, one of the biggest idol groups. They are very famous internationally and often their songs are the most used in videos on the platform.

They recently joined TikTok and broke the record growth speed record, reaching over a million followers in less than four hours. Currently, his account has more than 10 million followers and almost 60 million likes. Check them out here!

Brazilian singer, songwriter and businesswoman, Claudia Leitte started her career in 2001 as vocalist for the banado Babado Novo. In 2008, he followed a solo career releasing the single “Exttravasa” and his first album, “Ao Vivo em Copacabana”.

On TikTok, post funny videos alone and with your child, in addition to dancing and singing, posting parts of shows and using various filters. With over 400 thousand followers and almost 700 thousand likes, your TikTok is available through the link.

Luciano Huck is the host of Caldeirão do Huck, from Rede Globo, and is quite famous throughout the country. Since 1999, it has shown the program, which won several awards for best variety show and Huck won the award for best TV presenter.

Post videos with your family on TikTok, where you dance and sing with them, using various filters. He posts parts of his program, too, and currently has more than 500,000 followers and more than 2 million likes. Click on the link and check it out right now.

Finally, we have Kylie Jenner, an American media personality, who has participated in the show “Keeping Up with the Kardashians” since 2007 and is the founder of her own beauty products company, “Kylie Cosmetics”. She, along with her sister, are some of the most influential teenagers in the world.

On the social network, she posts videos dancing and singing, lip-syncing, showing her products, and advertising her brand. See her profile, which has 6.3 million followers and almost 40 million likes, here. 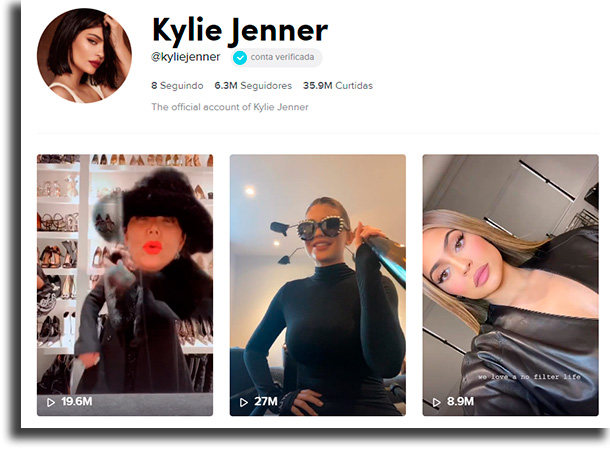 So, what did you think of our selection of the biggest celebrities on TikTok?

Leave in the comments your opinion about the celebrities we chose to include in our article, saying if you already followed any of them. Don't forget to check out our article on the most popular personalities on TikTok and the best TikTok videos for fun too.

In addition, if you want to be famous on TikTok yourself, it is highly recommended to use Stim Social, an excellent program that manages your account on the platform and helps you gain many followers in an organic way, quickly. By clicking on the link, you get a 5-day FREE trial!